The Edificio Kavanagh in the Retiro neighbourhood of Buenos Aires is ostensibly a monument to the wrath of a scorned woman. And a reminder that you mess with a woman, especially one of means, at your own risk!

Corina Kavanagh, an Irish heiress, fell in love with Aaron, the heir to the Anchorena family, whose grand palace* and private church could be seen arrayed around the beautiful Plaza San Martin. The two hoped to marry, but Mercedes Castellanos de Anchorena deemed the nouveau rich, protestant bloodline of the Kavanagh family unworthy of her son and forbade the union. The son obviously had no say in the matter.

An infuriated Corina vowed to avenge the humiliation. When the opportunity arose, she outbid Mercedes for the narrow, sloping plot of land in front of the church of the Holy Sacrament, that the Anchorenas had been planning to build a new mansion on, to be even closer to their church and crypt.

Corina then entrusted her architects – the renowned Sánchez, Lagos and de La Torre – with a single brief: to erect a building tall enough to completely obscure the church from the Anchorena palace! Going to the extent of selling two of her estancias to finance the extravagant project!

For an edifice conceived out of so much acrimony this 120 meter, 32 story luxury apartment complex is a remarkable piece of architecture, that has remained an iconic symbol of Buenos Aires! Built in 1934 (when Corina was barely 39) in the Rationalist style characterized by an economy of form and a lack of ornamentation, this was one of the world’s first reinforced concrete skyscrapers. One of the first with central air-conditioning and state of the art plumbing and for many years the tallest building in South America! Its 105 exclusive apartments are apparently still coveted and it was deemed a National Heritage in 1999. 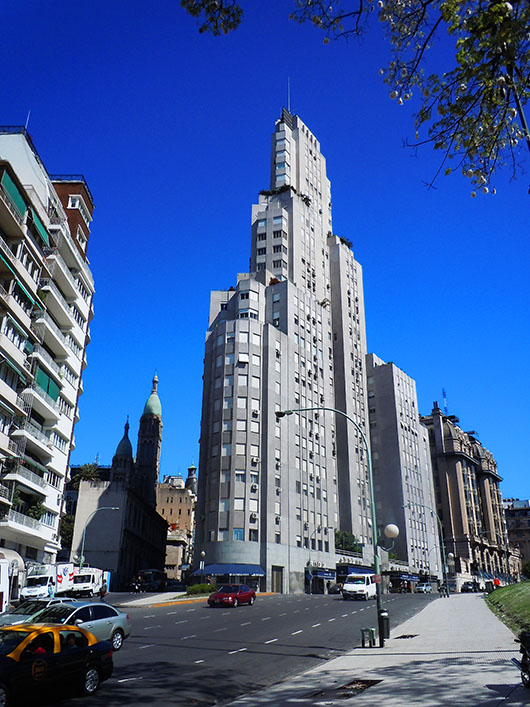 Corina retained the largest apartment that stretched across the entire 14th floor, where she lived until 1984, possibly reveling in the fact that Mercedes Anchorena would forever lie in the crypt of the Church of the Holy Sacrament in the perpetual shadow of the looming skyscraper that bore the Kavanagh name.

[That is the legend and most guides will swear by it. But they fail to mention one simple fact. Mercedes Anchorena died in 1920!! We visited her crypt under that beautiful church on the Corina Kavanagh street]

* Some accounts suggest it was Corina’s daughter who had an affair with Aaron Anchorena.

* The Anchorena Palace is now the office of the Ministry of Foreign Relations.