High up on the hills bounding the French riviera, like some lofty nests of birds of prey, sit the villages perchés.

The perched villages, originally built as defensive fortifications against marauding pirates and invading armies, fell into disrepair postwar, receiving a new lease of life over the next decade, when coastal residents restored the crumbling buildings to their former glory. Then renowned artists like Renoir and Matisse decided to call them home, and led to the influx of an avalanche of tourists.

Cagnes Sur Mer was Renoir’s final home, but somehow escaped the fate of St Paul de Vence and similar hill towns, while retaining much of its tranquil charm, thanks mainly to its residents dogged resistance to commercialisation.

Cagnes Sur Mer comprises the lower and relatively modern town of the same name and the medieval Haut de Cagnes capping the hill. The two are connected by a navette (shuttle) that plies the route every 15 minutes until 10pm. On the other side is the rather overdeveloped fishing village and beach resort called Cros de Cagnes.

We chose Haut Cagnes as our base to explore the Cote d’Azur, as much for its visual and architectural appeal as for its proximity to Nice and the fact that the lower town was a major transport hub for the area. Nice, Vence, St Paul de Vence, Antibe, Eze, were all minutes away by bus or train.

At the core of the lovely village is the little square, lined with a handful of wonderful restaurants and dominated by the Chateau Grimaldi, whose ramparts reward one with panoramic views over the countryside, all the way to the millionaire coast in the distance!

Our charming B&B overlooked the square where the entire village seemed to congregate in the evenings, and we spent many hours people watching and witnessing Boule contests. Even mock sword fights between petit knights!

Our favourite passtime though, apart from exploring those narrow cobbled streets, was to carry a bottle of our favourite wine (stocks replenished at an excellent store downhill) out to a bench on the edge of town, and watch the light fade across the valley. 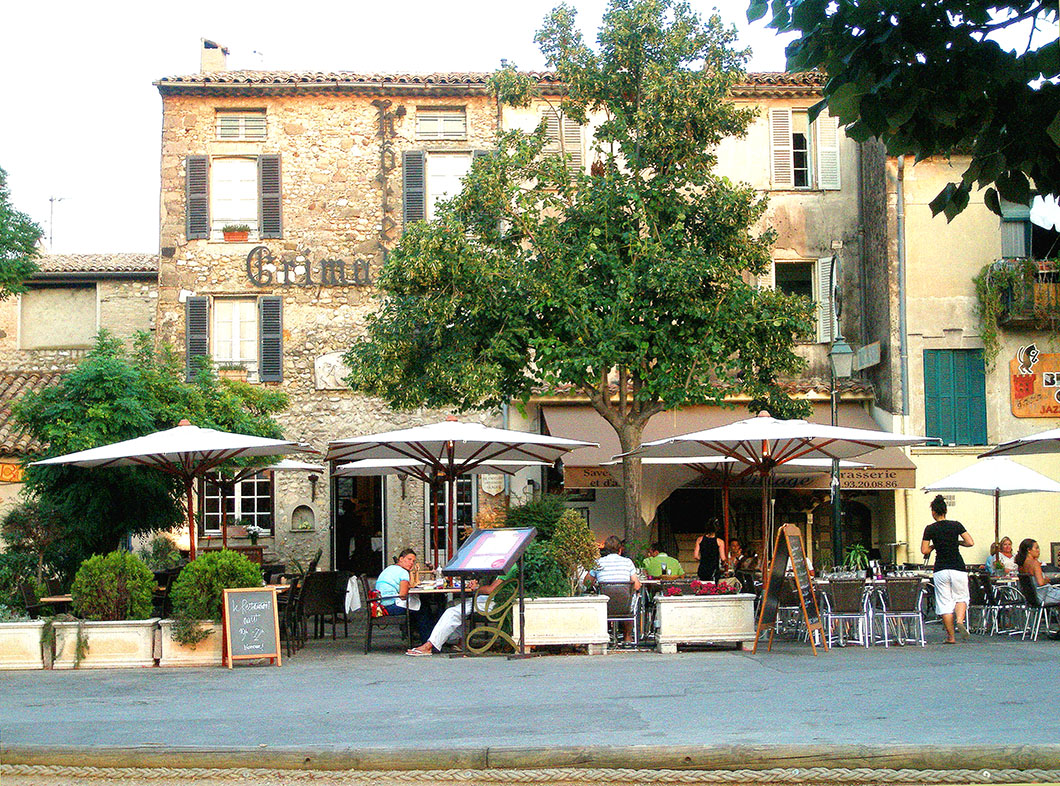