R & I have had many turning points in our lives. Those serendipitous moments when things could so easily have gone the other way.  And we have often argued over whether these were mere co-incidences or karmic interventions.

R believes in hard work and sagacity. I do too. I really do. But I am too much of a romantic to completely rule out luck….or the winds of destiny.


Take the little known but astonishing story of Mirza Ghiyas Beg…..a bankrupt Persian nobleman who joins a caravan to Agra (then Akbarabad) along with his young family in the hope of a better future. Once there, he somehow finds employment in the court of Akbar the Great.

After Akbar’s demise his son Jahangir elevates the astute Ghiyas Beg to Wazir (chief minister), and anoints him ‘Itimad-ud-Daulah’ (Pillar of the state)! By this time, his daughter Mehr-un-Nissa – who he had actually considered abandoning at birth owing to his state of acute penury – is widowed. On the emperor’s request she is summoned, along with her daughter Ladli Begum, to be maid-in-waiting to his stepmother (Akbar’s wife) Ruqaiyya Sultan Begum.

A tantalising, and I suspect not wholly accidental, glimpse of Mehr-un-Nissa’s unveiled face at a ‘Meena Bazaar‘ in the Agra fort leaves Jahangir besotted. Before long she is ‘Nur Jahan’ (Light of the world), his twentieth (and final) wife and chief consort. And owing to Jahangir’s many addictions, one of the most powerful women in Mughal history.

Soon, who do you think her stepson, Shah Jahan, (who incidentally, resents her power and is plotting to wrest the throne) falls head over heels in love with? Her niece (brother Abul Hasan Asaf Khan’s daughter) Anjumand Banu – the ‘Mumtaz Mahal’ of the Taj Mahal fame!

From pauper to ‘Pillar of the State’, and the patriarch of two extremely influential empresses! Tell me, would all his astuteness have been worth anything without the kind hand of providence?

Following is a gallery of the exquisite final abode of this remarkable man, paid for and personally supervised by Nur Jahan after she is forced into confinement by her own brother and stepson. Built between 1622 – 1628, the domeless tomb of I’timad-ud-Daulah is believed to be a transition from the red sandstone Mughal monuments of the time to the white marble and Pietra Dura architecture that was to follow.

It isn’t called the ‘Jewel Box’ for nothing. 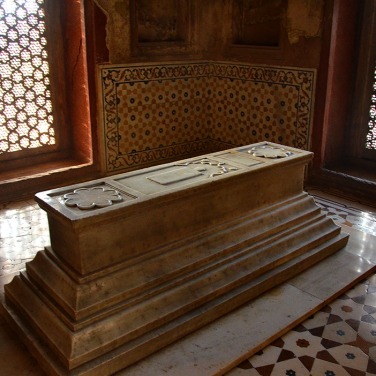 Related posts: The Simplicity Of Perfection

70 thoughts on “The Incredible Destiny Of Mirza Ghiyas Beg!”