“Oberoi Hotel, Jawaharlal Nehru Road”  we repeated helpfully, as our cab driver frowned at his job sheet. He bobbed his head vigourously in response, “Yes, yes, yes…..Grand Hotel, Chowringhee”.  Turned out they were one and the same. The trend of our interactions with anyone we stopped to ask for directions in Calcutta followed a similar vein:

So chuck those carefully marked Google maps when you visit next, unless you have taken the time to pencil in the old street names. Present day Calcuttans, it seems, do not share their card carrying comrades’ paranoia of all things European. Calcutta, is Calcutta to most residents, whatever her latest nomenclature!

Even more surprising however, was the matter of fact reference to colonial segregation. That the distinctly European areas around Chowringhee and the less affluent ‘native’ Northern sections, are still referred to as ‘White’ Town and ‘Black’ Town. And in a ‘red’ state at that!

Sightseeing therefore is easily compartmentalised into white and black, and even an indistinct grey area in between, where many other cultures collide. While the edges are beginning to blur, the contrasts between these neighbourhoods remain stark.  Affluent old families from both areas have relocated to newer, more salubrious suburbs, leaving decay and disrepair in their wake. And a city caught in a time warp.

It felt strange to be struggling to order from restaurant menus like we would say, in Paris or Beijing! (My knowledge of Bengali is possibly a little worse than my rudimentary French, especially when it comes to food terminology.) The cuisine is as diverse as its population, and legendary Mughlai rolls vie with Anglo Indian cutlets, and sweet Mishti Doi with Chinese dumplings and Jewish baked goods.

Bengali food, overpowering in its use of mustard and mustard oil, is something you either love or hate, and we loved most of what we tasted in our four days. The highlights being Chef Joy’s fusion chilli pickle and cheese baked crabs (the rest of the meal was tepid in every sense of the word) and our lunch in a tiny Dhakai (Bangladeshi) ‘mess’ called Kasturi, that served outstanding seafood. I still salivate at the memory of the Kochu Paata Chingri (river shrimp and greens curry)!  I would go back just for that. And the Nolen Gurer (new palm syrup) ice cream that our hotel churned up on request.

Calcutta’s origin is debated. Until recently Job Charnock was credited with founding the city when he bought and converted three villages – Sutani, Govindpur and Kalikata – into a trading port in 1690. But a 2003 High Court ruling overturned that piece of history by stating that the Nawab of Oudh only granted the land rights to the aforementioned villages to the British in 1698, nearly five years after Charnock’s passing! There is no debate however that Calcutta’s transformation from swampy village to largest metropolis outside of London (at the time), is owed mainly to the East India Company.

Dalhousie square (now BBD Bagh, after three freedom fighters – Benoy, Badal and Dinesh – who assasinated an IG of prisons inside the Writers Building) and its surrounds, boast some of the finest colonial architecture in the country. Most, spruced up and in better stages of preservation – on the outside at least – than the decaying monuments and mansions in the rest of Calcutta. That ‘progress’ hasn’t claimed much of these heritage buildings so far is thanks mainly to the city’s 34 year long Marxist rule (1977-2011). There is talk of an Indo – British conservation project and a possibility of turning the area into a living museum.

Walking down the tree lined boulevards of ‘White’ Calcutta on a Sunday morning is eerily evocative of the Raj. I half expected a hansom to come clipping by. Then we turned a corner and came upon a cricket match in the middle of the road that halted only to let a yellow ‘ambassador‘ cab pass. 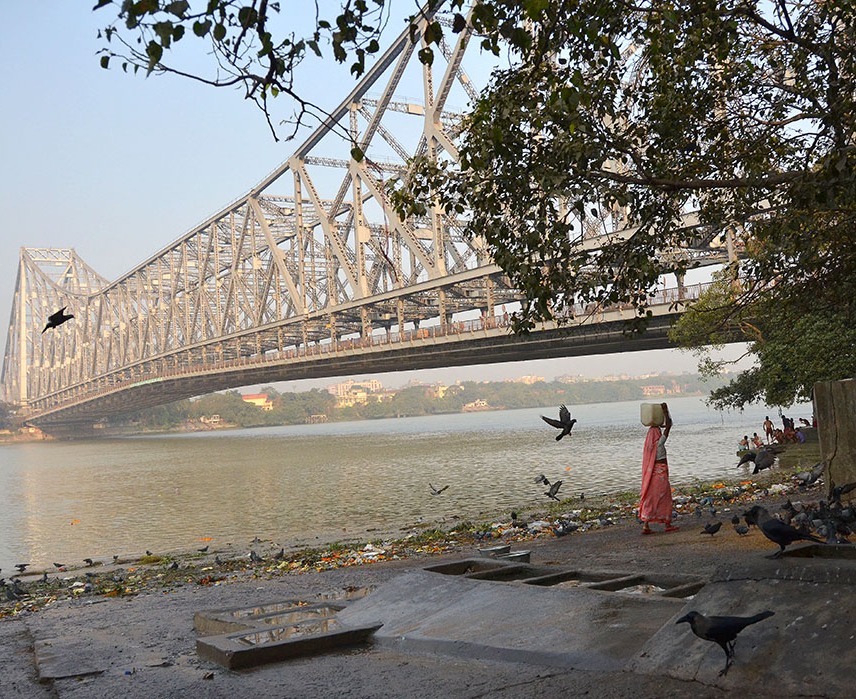 The Neo Baroque Metropolitan building, that was formerly the Whiteway Laidlaw department store. The interiors are in a terrible state of disrepair.

A palladian porch erected by the citizens of Calcutta in 1843, in memory of James Prinsep, an English Antiquary who deciphered the Brahmi script and consequentially emperor Ashoka’s edicts. 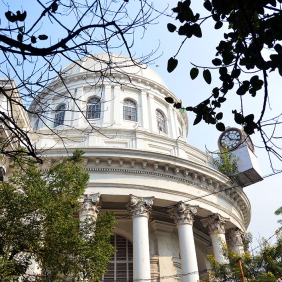 64 replies to Echoes Of The Raj