Few tourists that brave the crush of people on Las Ramblas in Barcelona, are aware of the existence of a masterpiece – an original Joan Miró mosaic – right under their feet in the middle of the pedestrian street near the Plaça de la Boqueria! Get there early (9am is early enough by Spanish standards) and you will have it all to yourself.
_

As excited as I was at finding the Miró, my loyalties lie with the muted hues and classic patterns of ancient mosaic floors. Below is a selection of mosaics, that have been cordoned off and are not technically underfoot at present, but still in situ. 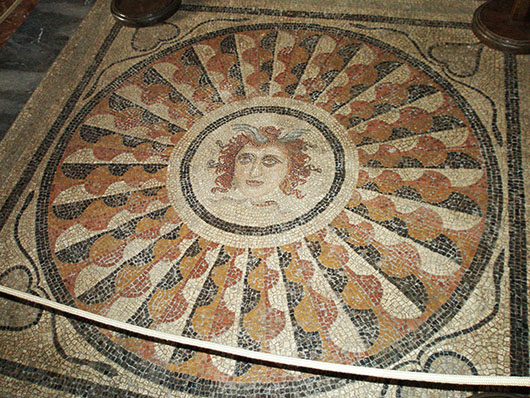 This Medusa head  in the Palace of the Grand Masters of the Knights of Rhodes, is a 1912 reproduction commissioned by the Italian court, when the original 14th century palace was destroyed in an explosion

A 1st century mosaic floor from the Church of St. Cosmas and Damian in the ancient Roman city of Jerash in Jordan, also known as the Pompei of the East.

The famous mosaic map of Madaba in the Church of St George, is considered the best representation of the biblical lands, up to 570 AD. After the Islamic invasion a few figurative representations were removed in keeping with Islamic religious codes. We spent a few hours here, on our way to Petra, but an overnight stay might be warranted. 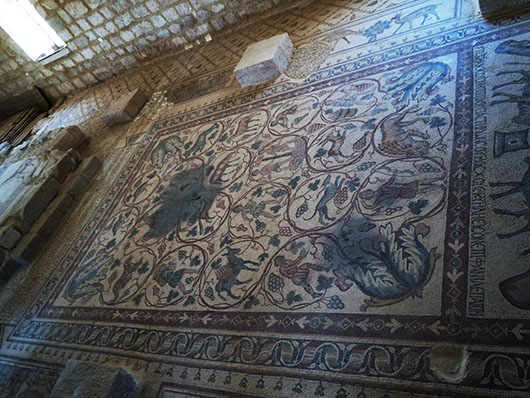 No that isn’t a carpet! That is a mosaic floor in a lesser known residence in Madaba. There is conjecture that there might be a whole lot more undiscovered mosaics underneath the entire city!

The exquisite Mosaic Museum within the Arasta Bazaar in Sultanahmet, Istanbul displays part of the floor of the peristyle courtyard of the Grand Palace of Constantinople, that was accidentally uncovered during construction work. These 6th century mosaics represent an aesthetic that is absent of religious motifs, showing instead hunting scenes and scenes from mythology, like the geese herder above and the incredible leopards’ kill on the header. This isn’t part of most tour itineraries. But do make the effort if you are ever in Istanbul, you won’t be disappointed.

84 thoughts on “Stepping On Masterpieces”