Bagan has always been synonymous with Burma for me. The vivid imagery of hundreds of mystical pagodas rising out of vast misty plains or silhouetted against a gloriously golden sky has beckoned me for as long as I can remember.

The reality however was unexpectedly mixed. The temples are stunning from afar. Close up, the mystique gets eroded somewhat, and you begin to understand why a few zealously restored and pressure cleaned facades have kept this unique heritage ensemble off the UNESCO list.

Roughly 2300 surviving temples, stupas and shrines dot some 16 square miles (40sq km) of verdant Irrawaddy plains. The numbers were said to have been closer to 10,000 once! Most constructed at the peak of the Bagan empire between 10CE to 12CE, when much of South East Asia came under its purview.

Originally founded by King Thamudarit in the 2nd century, Bagan – then known as Pagan – grew into a fortified town under King Pyinbya in 850, and into one of many minor city states in the region, relatively isolated from the outside world until the reign of King Anawrahta. The city’s rise to prominence closely followed this King’s ambitious conquests.

His forcible acquisition of the Tripitaka texts (Sinhala palm leaf Buddhist texts translated to Pali) from Thaton, transformed Pagan into a powerful centre of Theravada Buddhism, attracting an influx of eminent scholars and students. The first of the pagodas, commissioned by members of the royal household and wealthy individuals as offerings to gain ‘merit’, began appearing. The building frenzy continued into the reigns of successors: Kyanzittha and Alaungsithu.

By the turn of the twelfth century, the advancing Mongols were a real threat. The execution of two of Kublai Khan’s messengers, turned out to be a most injudicious response to the demand for tribute. When attack was imminent, emissaries were hurriedly dispatched to broker peace.

Ironically the last of the Pagan kings, Narathihapate, and his jittery subjects, fled the city before the return of the emissary who had in fact succeeded in halting the Khan’s advance! Narathihapate, whose cowardly deed forever branded him: Tayoke Pyay Min (King who fled from the Chinese), was eventually vanquished in the battle of Ngasaunggyan in 1277. Pagan never regained its lost glory.

There is no dearth of lists online of ‘best’ pagodas to visit. The prominent ones are naturally the most popular and teeming with people. Our cruise itinerary covered a fair mix of big and small temples over two days. And it was in the lesser known shrines, and on the roof of a quiet, dilapidated stupa, awaiting the dawn of a new day over that incredible field of pagodas, that we re-discovered the magic of Bagan.

A massive temple – circa 1167 – built by the evil king Narathu, who caused the death of many people including his own father and his Indian queen. His assassination inside this very temple by his father in law earned him the title ‘Kalagya Min’ (The king killed by Indians!)

Reproduction mural depicting the Hindu creation myth in Nat-Hlaung-Kyaung, the only Hindu temple in Bagan. Brahma, Vishnu and Shiva emerge from the naval of a supine Vishnu. Quite unique even for me!

A 1218 temple built by King Nantaungmya to mark the spot where he was chosen as heir by his father in a tradition in which a white umbrella tilts toward him. And that’s a real monk in case you are wondering! 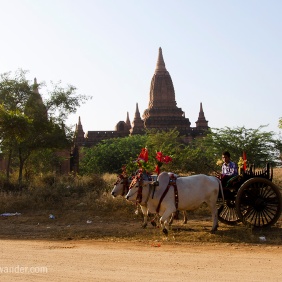 Fragments of wall frescoes along the interior passages of the 9th century Pahatothamya temple, are considered the earliest surviving murals in Bagan. 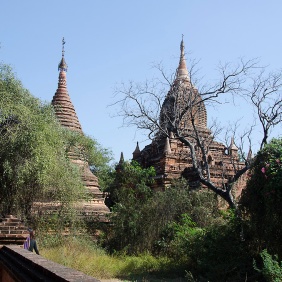 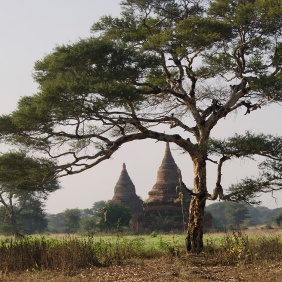 This beautiful temple, in Mingyaka, South of Bagan, boasts some of the most beautiful Jataka frescoes. Next door are the UNESCO certified, quadrilingual stone inscriptions that are considered the Rosetta Stone of Burma!

One of two original 11th century 9.5 mt tall standing Buddhas in the Ananda temple. This faces North. Two more replicas face East and West. Ananda Paya is considered the “finest, largest, best preserved and most revered of Bagan temples.”. The crowds are proof.

89 replies to In Photos – The Pagoda Fields Of Bagan