Small is relative in this country of superlatives, but Xian (pronounced Shi-Aan) wasn’t small by any stretch of the imagination.

With a population of over eight million* and the wrecking balls in full swing, Xian is fast catching up with its larger counterparts. Despite all this, despite our surprise at its bigness, the constant grey skies and overhanging haze, the crazy traffic and equally crazy crowds, we liked Xian.

This was where China began when First Emperor Qin Shi Huang Di annexed and unified five provinces into an imperial state in 221 BC. In fact China gets its name from Qin (pronounced Chin). It was in Xian that we began to grasp the essence of Chinese history. And the chronology of its dynasties. We now knew that Tang was after Han, and before Song, Ming and Qing!

Known in the beginning as Chang’An or “Eternal Peace” (the present name denotes “Western Peace”), Xian’s strategic location at the start of the Silk Road, led to its becoming the capital city of thirteen dynasties over 1100 years!

That is a lot of history, and it is evident in the smorgasbord of antiquities – underground armies, tri colour glazed ceramics, bronzes, murals and a whole lot more – in the two on site museums featured here & here, and inside the amazing Shaanxi History Museum*. It is anybody’s guess as to how many more treasures lie buried beneath this ancient capital. 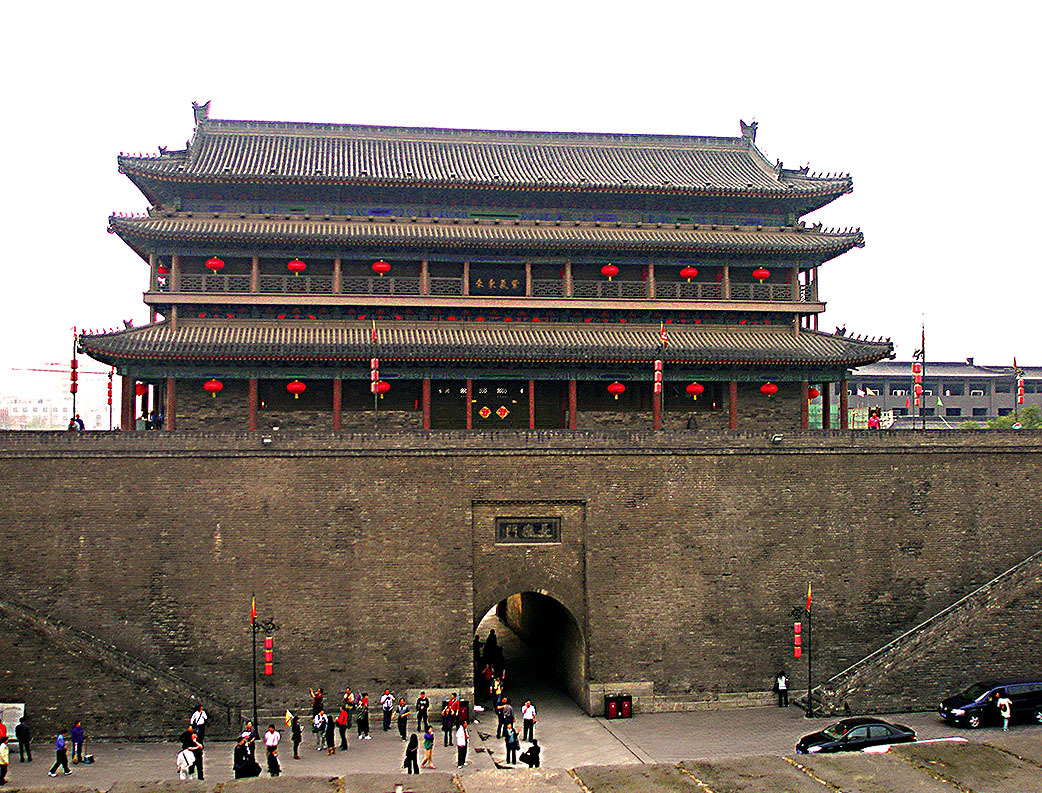 Central Xian is fortified by one of the oldest and best preserved city walls in China. Started by the Tang rulers (194 BC) it was restored during the Ming dynasty (1400AD). The four gates facing the four cardinal directions have three towers and a drawbridge each.

Tandem bicycles are a fun way to navigate the top of the wall with a view of the extended city as far as the eye can see and of tall modern concrete structures juxtaposed against the traditional architecture of the towers.

Right in the centre of the fortified area is the Bell tower, where the bells were struck at dawn as in most Chinese cities. From the bell tower lead four roads in four directions, connecting it to the four gates in the wall and continuing beyond to an amazingly well planned Tang dynasty grid system.

Said to be the grandest and the best preserved of all the bell towers in China, this is particularly beautiful when it is lit up at night. As is the Drum Tower (with – you guessed right – the largest drum in China!) whose drum beats once signaled the end of day. 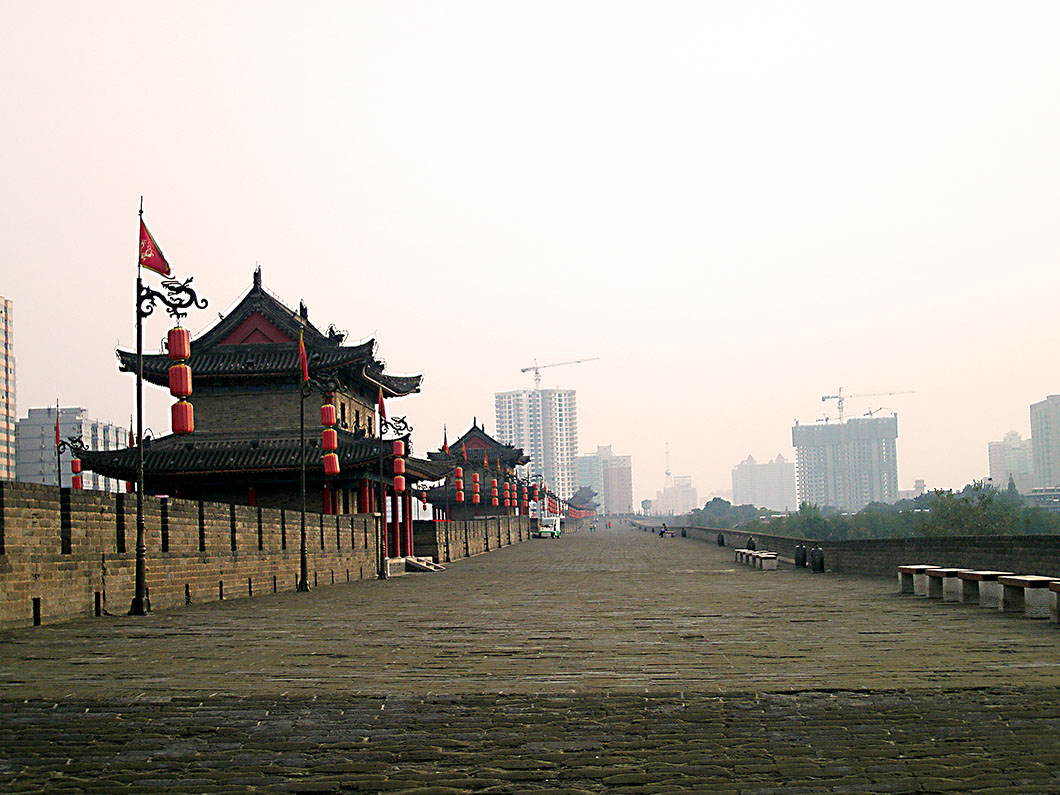 The descendants of Arab & Persian merchants that plied the Silk Route, the minority Hui community, have left their mark on the cultural fabric of Xian. The beautiful Grand Mosque, in an alley behind the Drum Tower, is one of the oldest (742AD) in the country. The Chinese styled portals and pavilions with Arabic inscriptions, a wonderful blend of the two cultures.

Outside, the Muslim Street and surrounding alleys come alive with ethnic food stalls every evening. We saw, and smelt, roasting skewered meats and nuts and piles of sweetmeats in the most lurid hues. We utterly regretted not having stayed on to sample some of the goodies. We had opted for the Defachang dumpling dinner that turned out to be way too touristy and very avoidable. To add to our dismay, my camera ran out of juice and I had forgotten the spare battery in the car.

Our last stop was the Great Wild Goose Pagoda, built to house Buddhist texts brought back from India by Xuan Zang (or Hüen-Tsang as we were taught in school.)  The square outside has a lovely water show at night, perfect for people-watching if you aren’t in the mood to get drenched.

We didn’t stay long though. We had an early wake up call for our date with the eternal guardians of the founder of Imperial China.

*Estimated population at the time of our visit in 2009.

*Entrance to Shaanxi History Museum is free, but for a special fee of 150RMB (reserved a day in advance) history and art buffs like us can view a few exquisite murals in the vault that have been retrieved from neighbouring Tang tombs. We thought it was well worth the price. 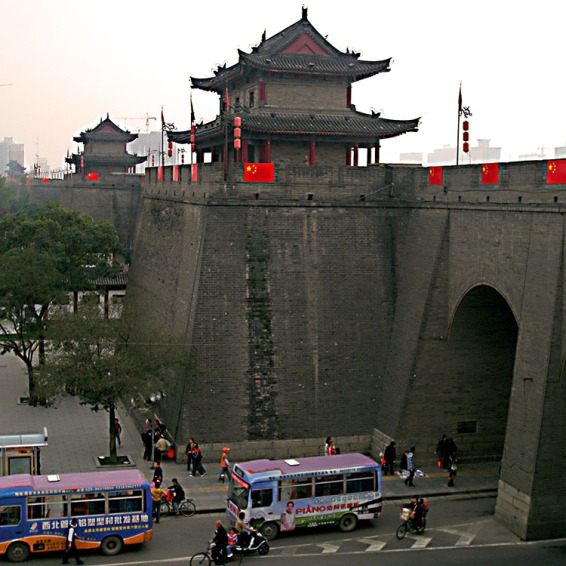 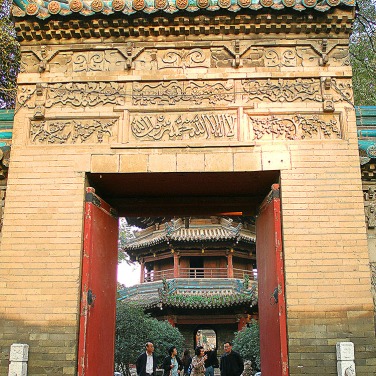 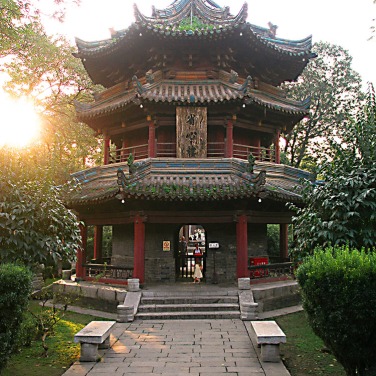 I so wanted a Tang horse like that, but the good ones were way too pricey.

21 thoughts on “Xian – Where China Began”