Some rather far fetched myths are ascribed to the reason why South Kanara – the province that Mangalore is a part of – adopted the matriarchal system of inheritance as early as 10 AD. (You can read a rather sketchy and badly written version here.) This was a very progressive law for the time and continues to this day, albeit restricted to ancestral property.

According to this system, ancestral property was passed down from mother to daughter. Sons had life interest but were entitled to one share at the time of partition or sale, while their offspring had no claim whatsoever (beyond their father’s single share). Upon their death, their nephews (sisters’ sons) took over the running of the property and their families were expected to return to their matriarchal homes. Daughters, on the other hand, could lay claim to one share each for every single living member of their individual household across multiple generations!

Even today, when there isn’t a lot of ancestral land left to be carved up, one is said to be ‘born’ in the father’s house but ‘belong’ to the maternal family. (Complicated I know!) Having a daughter was therefore crucial to carry on one’s line of descent. (Mine ends with my grandsons:-( ) This is unique to this region and to some communities in neighbouring Kerala and Nagaland in the North East. The rest of India hankers after male progeny……preferably fair skinned.

Things didn’t always work out of course. And the widows sometimes returned to emptied coffers and pledged land. It was to insure their families from similar fates that some patriarchs used their personal wealth to build houses of their own.

This was the house R’s grandfather built for his young family in the same village as his ancestral home and close to the family temple*.

My mother in law was born on the 5th of May 1926, the day of the housewarming. R’s stunningly beautiful grandmother never tired of bragging about how she served a traditional celebratory lunch to each of her guests and then quietly retired to her room to deliver her youngest daughter, her sixth child. (She bore two more sons in the course of the next four years.)

She also never tired of talking about her house. About the egg tempera glaze on the columns, the beautiful stencilling around the cornice, the amber and blue glass on the shutters, the beautifully carved wooden pillars, the gorgeous blown glass oil lamps and the room on the first floor, decorated with frescoes to commemorate the visit of the Maharaja of Mysore to the family temple and his overnight stay in the house. It became a kind of tradition(until R broke it!) for every grandson to spend his wedding night in this ‘Rangda Malige‘ (painted upper-floor).

R never knew his grandfather who passed away just over a decade after moving into his new home. But he remembers holidays spent in this house with his uncles and aunts and numerous (22 in all!) cousins, where he smoked his first cigarette hiding in the fields, and was offered his first drink by his liberal grandmother. He talks fondly of the love and the laughter that filled the house. And the food. Somehow, our memories of home are so intertwined with food.

But the glory of the ‘Zamindar‘ system, as with most other feudal systems in the world, did not last. Change was imminent. ‘Feudal’ became a bad word in an increasingly socialist scenario. Sweeping land reforms transferred lands to tenants, depriving hereditary landlords of their primary source of income.

The daughters, usually married off to well educated professionals, were mostly spared. The sons that adapted and made the transition to salaried class, followed their dreams in distant lands. Those that remained in their crumbling mansions were devastated. Having been wealthy beyond the necessity of working for a living left them ill equipped to cope. They resisted. Drawing lines in the shifting sands isolating themselves from the realities of the modern world. They just knew no other way.

By the time I entered the picture, the slide had begun. Fun family gatherings recreated for me fleeting images of life in the not too distant past. We laughed, we drank, we ate and we left. The grand old lady, still so ethereally beautiful at 90, remained. Like an apparition in a haunted house, alone with her memories. Unable to adjust to city life with her daughters, unable to cope with not being queen of all she surveyed.

The family gathered again for her funeral.

Many years later, my mother-in-law’s life came full circle when her mortal remains were returned to her childhood home. And as per her wishes, cremated in the exact same spot (as her mother) in the field next door, in a beautiful ceremony that I had never witnessed before and likely never will again.

Meanwhile, the empty shell of her father’s house awaits its death knell… 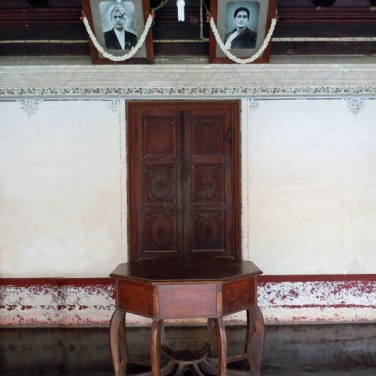 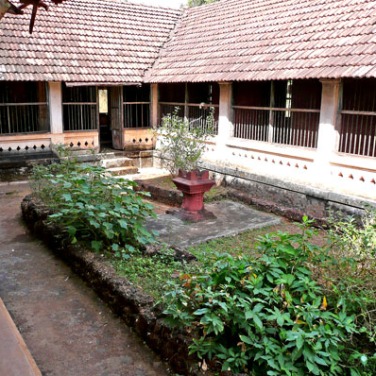 Overgrown East courtyard leading to the dining and kitchen sections

Update August 2015: The family relinquished all rights to the house a few months ago.

* The Hindu Religious and Charitable Endowment Act grants state governments the power to take over all Hindu temples with an annuual income exceeding Rs. 200,000, thereby making them hotbeds of political intrigue. The Kateel Durga Parameshwari temple is now being administered by the state government (although R’s grandfather’s family is still entitled to nominate a hereditary trustee as they have been since 1882) and has been garishly restored. Think electric blue and baby pink on ancient wood and stone! The inner sanctum cannot be touched, thankfully.

85 thoughts on “The Winds Of Change…”