Six concentric terraces surround a central circular ‘arena’ connected by a series of stone ‘steps’ fixed to the retaining walls in a radial pattern, mimicking the rays of the sun.  Six more surround them in an elliptical shape and another eight stepped terraces at the perimeter, span a portion of the narrow end of the ellipse, almost like a viewing gallery. There are more such elliptical terraced hollows adjoining this one!

Scholars and engineers have long speculated about the significance of these surreal terraces in the Centro Arquelogico Moray – close to Cusco, Peru – ever since it was first photographed in 1931.

The ‘agricultaral research station’ seems to be the most generally accepted theory, based on the remarkable features of the site. The fact that the lowest level (each level is about two meters deep) is perfectly drained and never gets flooded even after incessant rains. The amazingly engineered ‘micro climates’ in each level, with temperatures varying upto 15°C (27°F) between the top and bottom (apparently for experiments with different varieties of plants) And the elaborate, concealed irrigation channels.

Why is this located in an area that has calcified soil and gets the least rainfall?

Why is there no sign of the presence of other dwellings that would have been necessary to house staff working at an agricultural research center of this scale?

Why does an agricultural site need the astounding acoustics that exist here?

How did this – the only Inca monument that is not a building – survive practically intact, through the centuries?

Why do the Quechuan people congregate here annually to perform rituals in honour of Pachamama or mother earth on the solstices, as they have been doing for centuries (as indicated in reports by early Christian priests in Cusco)?

Why were there carved rocks or  ‘Huacas‘ usually found in locations where offerings are made?

Could this have been a place of religious worship and the water chanelled for ritualistic use? Could some channels have been used to pipe ‘Chica’ or corn beer as offering on special days?

And what on earth was that strange phenomenon in the sky directly above our heads, only visible from the centre of the lowest circle? A kind of glowing halo with a darker center (that we would have missed if it weren’t for our guide)!!! Couldn’t capture it with my camera though.

There are no answers, and till we solve these riddles we will have to settle for the most probable assumption for the original purpose of this mystifying engineering marvel. 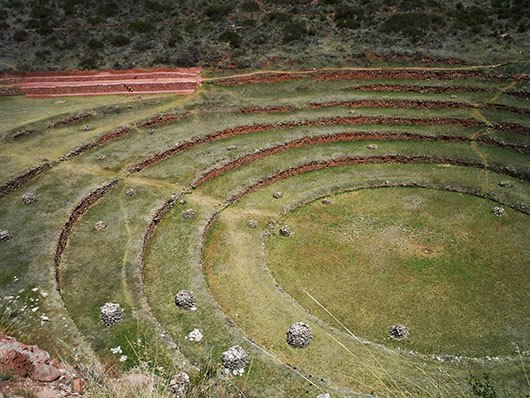 Until next time…..happy travels, no matter where life takes you!

92 thoughts on “The Mystical Inca Ruins Of Moray”