Glimpses of the Moorish imprint on Spanish colonial architecture can be witnessed on a walk through the UNESCO site of Central Lima. Most glaringly in the stylised Mudejar influenced covered balconies incorporated into the facades of colourful 17th & 18th century mansions.

Originally built as much for the same purpose as their Iberian counterparts – to afford privacy to women of nobility – as for their aesthetic value, these ornamental balconies began to lose their appeal, with changing social norms and the advent of modern architecture in the early 19th century.

An art professor at the University of San Marcos, Bruno Roselli, was the first to recognise their historic value and salvaged several from demolition sites and transferred them to interim warehouses. His efforts were in vain however, for the warehouse and their contents perished in a fire.

The surviving balconies fell into disrepair until the late Nineties, when an “Adopt a Balcony” campaign was set up by Mayor Alberto Andrade in a last ditch effort to save them from extinction.

As we explored the Casa de Osambela – one of the few multi-storeyed mansions of the time in Lima – and its gorgeous balconies with Edward our guide, I could relate to his despair at the speed with which modernisation was eroding his cultural heritage, and his hope that enough will survive.

Credit – Aucahuasi – Wikimedia Commons. (Couldn’t locate my image of the facade for some reason!) 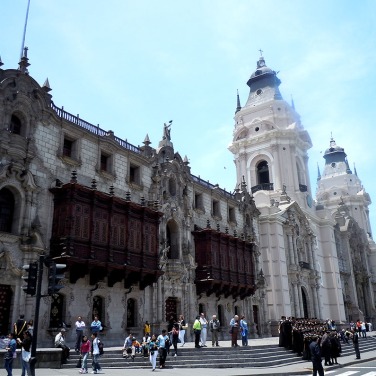 Details of adjacent balcony from inside the Casa De Osambela

Street view from inside the balcony

PS: The last two images of the – rather spruced up – blue facade of Casa de Osambela are courtesy: Wikimedia. Mine seem to be missing, possibly accidentally deleted!

90 thoughts on “The Wooden Balconies of Lima”