Torcello is where the story of Venice began. That story, along with the 7th century cathedral and the exquisite Byzantine mosaics that Torcello is famous for, makes it a memorable addition to any Venice itinerary.

The story makes compelling reading and the extraordinary chain of events, starting with the 5th century sack of Italy, makes one consider how much Venice owes Atilla the Hun!

Think about it: If that ‘barbarian’ hadn’t torched the Roman city of Altinum, if the residents of that great city hadn’t been directed by a disembodied voice to climb their lofty campanile and seek help from the heavens above, if they then hadn’t spied the distant group of islands on the lagoon  and hadn’t followed divine diktat to seek refuge in those islands instead of in Ravenna or Istria like most other refugees before them, there would be no Serenissima to sigh over.

And so it is that the names of the portals live on* while the glorious Altinum has been lost to time*. 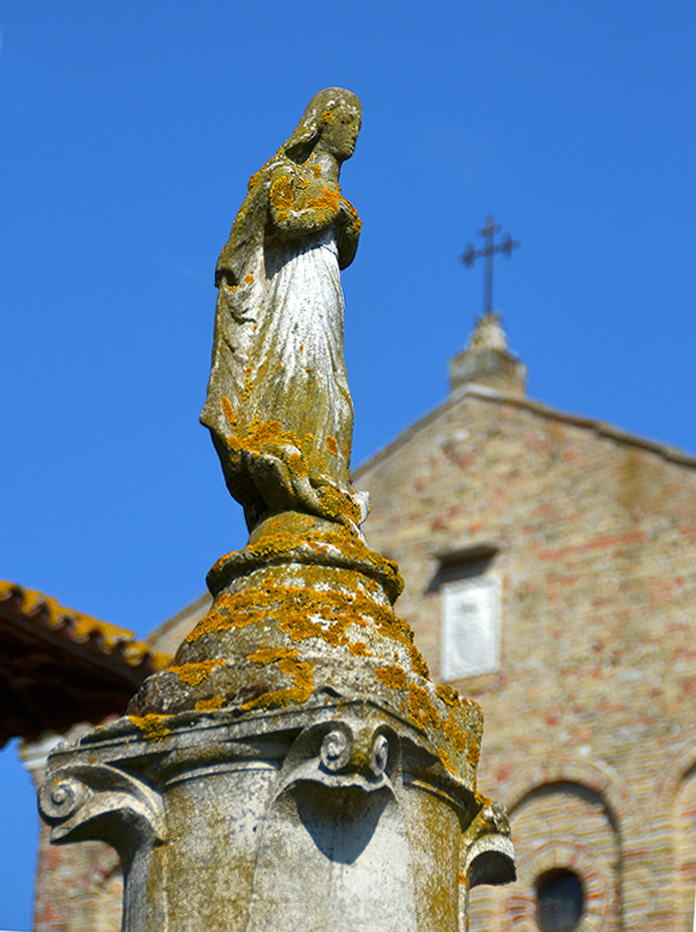 Of the six marine settlements, Torcello emerged the most dominant with its own cathedral and a campanile that mimicked the one they had left behind. Boasting a bishopric from the fifth to the fifteenth centuries and a population of nearly 50,000* at its zenith, with direct links to Constantinople.

But the parallel development of the wealthier Venice (after the relocation of the Doge to Riva Alto), and the degeneration of their lifeblood – the lagoon – into a malarial swamp, demanded yet another exodus. Less than twenty people call Torcello home today.

Of the two surviving relics from its days of urban glory, the cathedral of Santa Maria Assunta (639AD), the oldest church in Venice, is breathtaking in the spare, unadorned beauty of its architecture and its two stunning eleventh century Byzantine mosaic murals.

THE BYZANTINE MOSAICS OF TORCELLO

On the east end is the altar and dome dominated by the gilded mosaic of the ‘Mother of God’ or the ‘God Bearer’ mosaic. Beneath her, in a single concave row, are the twelve apostles standing on a field of poppies.

The mosaic at the west end, referred to as the ‘Doomsday Mosaic’, is the more striking for its extremely graphic depiction of the Last Judgement where Satan and his demons torment the souls cast into hell, while Christ is shown leading the saved to heaven.

The figure of Satan as an elderly bearded man is believed to be the second oldest known illustration of Lucifer in the world and closer in imagery to the Biblical version of the fallen angel rather than the cloven-hoofed and horned depictions of later Christian art.

These murals, although considerably simpler and less prolific, were still far more appealing to me than the splendour of Saint Mark’s even!

Significantly, both cathedrals are indicative in their very essence of the circumstances that prompted their construction: the former, in fear and humble gratitude for the refuge this land afforded, the latter, as a proclamation of power and glory of an empire that the island spawned.

*The islands of Ammianco and Constantiacum have been swallowed by the sea.

*The outline of an ancient Roman city buried beneath crop fields on the mainland near Venice and believed to be its ancestor city, Altinum, has been mapped in detail for the first time with the aid of aerial photography

PLAN YOUR DAY-TRIP TO TORCELLO

HOURS AND ADMISSION FEES TO THE CATHEDRAL OF SANTA MARIA ASSUNTA

Cathedral Santa Maria Assunta: €5 (€7 with audioguide, most handy for those interested in the symbolic details of the mosaics), Museum: €4 (Museum and Cathedral: €9 and including campanile is €10, but be sure to check museum hours beforehand). Church of Santa Fosca: Free.

Summers are over crowded. Spring and fall are the best times to visit.

Ideal time of day is early morning or after the departure of the lagoon tour groups around mid afternoon. I took the 5 min ferry ride after a picnic lunch on Burano and returned to Venice on the last ferry.

Torcello cathedral is a 15 min. walk from the landing pier. You should re-confirm vaporetto return schedules if you do not want to be left stranded on the island overnight.

Allow 2+ hours for the visit including the walk each way and a climb up to the campanile.

If you wish to combine all three islands in a long day trip: Start at Murano, then head straight to Torcello post lunch (or reserve a table at the Locanda Cipriani), visit Torcello cathedral in the afternoon and return via Burano. Burano’s vivid colours are best photographed in evening light.

HOW TO GET TO TORCELLO

The no.12 vaporetto (Water Taxi) connects Venice to Torcello from the Fondamenta Nove station via Murano and Mazzorbo. It continues on to Burano from Torcello.

I got off at Burano and then took the no.9 onward to Torcello. The no. 9 only plies between these two islands and takes 5min.

FARES: A single vaporetto journey is pricey at €7.50. Travelcards for the duration of your stay are a much better option. My 7 day travelcard was most useful for island hopping. If not opting for the multi day card, I recommend a 12 hr travelcard at €18.00 if combining Burano with Torcello or a 1 day card at €20.00 for all three islands.

Remember cards/tickets need to be validated at machines at the departure stations. Failing to do so will incur a fine of €60.00 in addition to the price of a single ticket.

WHERE TO STAY & EAT IN TORCELLO

Locanda Cipriani (where Ernest Hemingway was supposed to have stayed while he wrote “Across The River And Through The Trees’) and Ca’ Torcello are the best options if you want to stay overnight.

EAT: There are a couple of small restaurants midway on the path to the church. Osteria Al Ponte del Diavolo and Locanda Cipriani are pricier options and might require prior reservation. I didn’t eat in Torcello, so cannot vouch for either.

VENICE ON YOUR RADAR? 📌 PIN FOR LATER