Her tininess took us a while to process. I had known she was small, but at 10.5 cm tall she was shockingly diminutive! Almost lost in her obscure glass covered niche. We were surprised as well by the lack of prominence to an exhibit of such value.

The ‘Dancing Girl’ of Mohenjodaro and the Priest King are two of the better known art objects of the handful unearthed from the Indus Valley site of Mohenjo-daro (now in Pakistan). The former got left behind when the Indian government countered the Pakistani claim to ownership by agreeing to return any one of the two.

–
So I finally got to see the 4500 year old  bronze figurine that had captured my imagination for as long as I can remember. And despite her size, she seemed just as saucy and as impudent as I had imagined.  Nude. Hand on her hip. Head held haughtily high. Her very being exuding bold confidence.

No one knows who she was. The bangles up her elbow indicate she could have been married. A young bride? A queen perhaps ? British archaeologist Mortimer Wheeler describes her better:

“She’s about fifteen years old I should think, not more, but she stands there with bangles all the way up her arm and nothing else on. A girl perfectly, for the moment, perfectly confident of herself and the world. There’s nothing like her, I think, in the world.” ~

The Dancing Girl was the prime focus of our quick visit to the National Museum in New Delhi. But on our way out, a special exhibit titled “The Return Of The Yogini” grabbed our attention. The entire space was dedicated to a single beautiful sculpture of a female figure sporting a buffalo head and seated on a goose.

The 10th century sandstone sculpture of the Yogini Vrishanana weighing nearly 400 kgs, was smuggled out of a temple in Lokhari in the Banda district of UP, and later acquired by Robert Schrimpf, an art collector in Paris. Upon his death his widow donated it to the museum and it was brought back with much fanfare in 2013.  It is the first plundered Indian heritage antique to be reclaimed.

But the fact that not one of the remaining 63 Yoginis from the ancient and unprotected temple in Banda survived intact, gives one pause for thought. 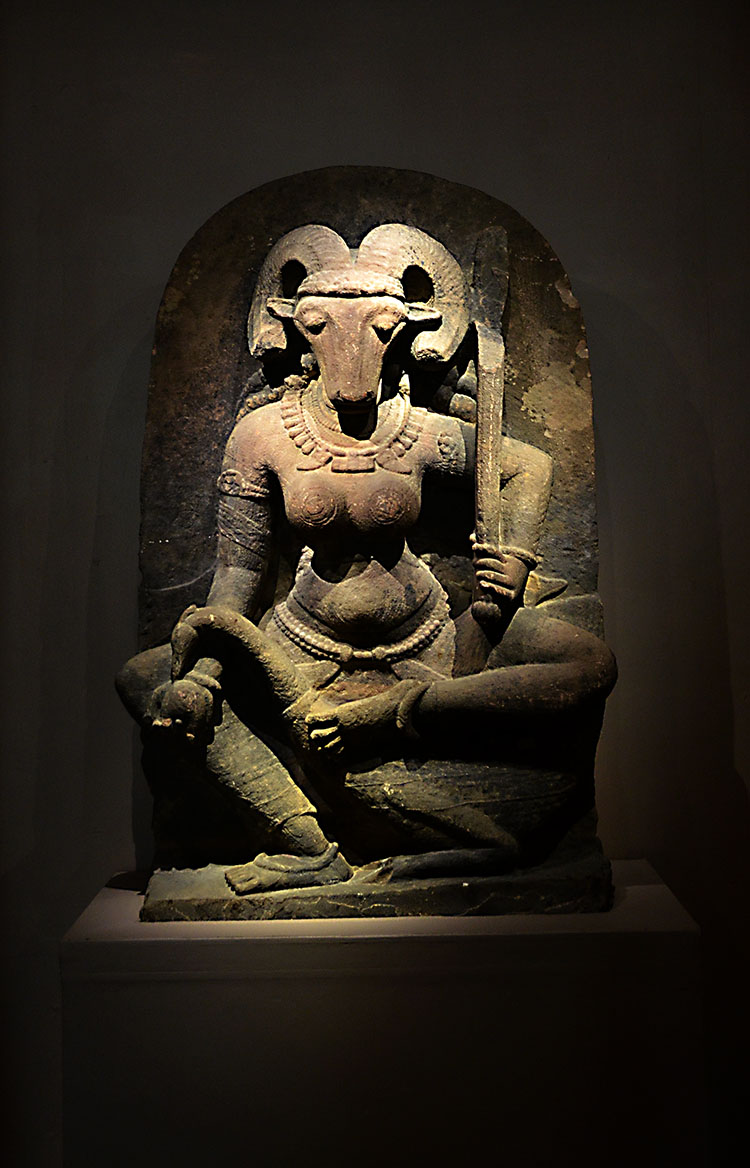 –
A Yoginii or Dakini, is hard to describe.  She is a symbol of the divine feminine. A fierce, shape shifting Tantric incarnate of the Cosmic Mother, A primitive animistic divinity, later absorbed into the cult of Shakti and Devi,  Worshiped between the 6th and 10th centuries in circular, roofless Tantric temples in groups of 64. Each denoting the eight major forms of Devi along with their respective eight attendants.

The Yogini’s exaggerated physical traits symbolise sensuality and fertility. Her bare body: the naked truth. Locked – as an equal – in the dance of creation with the God of destruction, as Shiva and Shakti, she is said to embody energy, balance, the life force of existence,

The recent ban on ‘India’s Daughter’, Leslee Udwin’s controversial and deeply disturbing documentary on the infamous 2012 Delhi rape case, and the furious debate and disheartening opinions that ensued, left me desperately seeking the ‘incredible‘. I have caught myself wondering when and why the glorification of womanhood and her equal status implicit in the primitive Dancing Girl and the Tantric Goddess, morphed into objectification?

The remarkably composed father of the young victim of that heinous crime asks as much at the end of the documentary.

“What is the meaning of a woman? How is she looked upon by society today?”

Questions that demand urgent consideration, today more than ever.

67 thoughts on “The Dancing Girl And The Goddess”