It is ironic that of the millions of visitors who flock to the grave of Mumtaz Mahal in Agra, few spare time to pay respects to her grand father-in-law, the third and greatest emperor of the Mughal empire in India: Jalaludin Mohammed Akbar (The Great).

Akbar’s story is as remarkable as the man.

Born in 1542 of Shia and Sunni parents in exile, in the home of the (Hindu) Rajput Rana of Umarkot, and bred in his paternal ancestral home in Kabul (while his father Humayun wrested the empire back from Pathan invader Sher Shah Suri in Delhi), he ascended the throne at thirteen under the guidance of his father’s skilled and trusted general Bairam Khan, put down an afghan revolt at seventeen, and took control of the empire from his able but cruel guardian by eighteen. He moved his capital to Agra and went on to extend and consolidate one of the most powerful empires of the subcontinent.

His early campaigns, possibly still under the influence of Bairam Khan’s vengeful legacy, were marked by brutality. The bloody siege of Chitor in particular and the massacre of thousands of civilians that followed, remains a blotch on his illustrious military accomplishments.

But he remarkably managed to evolve into a secular king, nearly two centuries before the term ‘secularism’ came into existence. His attempts to reconcile religious differences were daring for the time. He promoted fair trials, allowed the forcibly converted to reconvert, abolished the existing oppressive ‘pilgrim tax’ on non muslims, and elevated them – and his Hindu in-laws – to equal status in his court. His Rajput queen (princess of Amber) is said to have been the love of his life and had considerable influence on his religious outlook.

He built a hall of worship in his palace, Fatehpur Sikhri, where he met with representatives from all faiths without prejudice. He had the Bible translated to Persian. He ordered his son Murad to study the New Testament. He invited Jesuit priests to set up a church in Agra and is even said to have attended a Christian wedding where he translated wedding vows to the bride!

“……as the result of all the influences which were brought to bear on his Majesty, there grew gradually, as the outline on a stone, the conviction on his heart that there were sensible men in all religions, and abstemious thinkers and men endowed with miraculous powers among all nations. If some true knowledge were thus everywhere to be found, why should truth be confined to one religion, or to a creed like Islam, which was comparatively new, and scarcely a thousand years old; why should one sect assert what another denies, and why should one claim a preference without having superiority conferred upon itself?” ~ Mullah Abdul Qadar Badauni an Indo-Persian historian and critic of Akbar’s religious policies.

So he proceded to set up a new ‘divine faith’ named Din e Ilahi, that drew upon good elements from all religions. He dispensed with the clergy and cleverly appointed himself chief ‘interpreter’ of God’s will.  While Muslim theologians weren’t pleased, his subjects were. With the notion of equality at least, even if no one rushed to embrace the new and radical order.

The illiterate, dyslexic, astute statesman was buried in 1605 in a mausoleum in Sikandra (a suburb of Agra) that he designed himself and that seems as eclectic as his religious beliefs. It is set in a quadrilateral ‘char-bagh‘ garden that is home to herds of Indian antelope.

But it isn’t very clear whether his mortal remains are still in there.

Akbar’s legacy of harmonious co-existence was frittered away by increasingly hawkish descendants. The demolition of temples in Mathura – the birth place of Krishna – by his dogmatic great grandson Aurangazeb, incurred a fierce three decade long Jat uprising, in the course of which, and in retaliation for the horrific execution of a rebel leader, the mausoleum was desecrated.

It is believed that the remains of this most secular king of them all were dug up and thrown into a bonfire.

A profusion of white marble and black slate inlay!

Blackbuck in the gardens 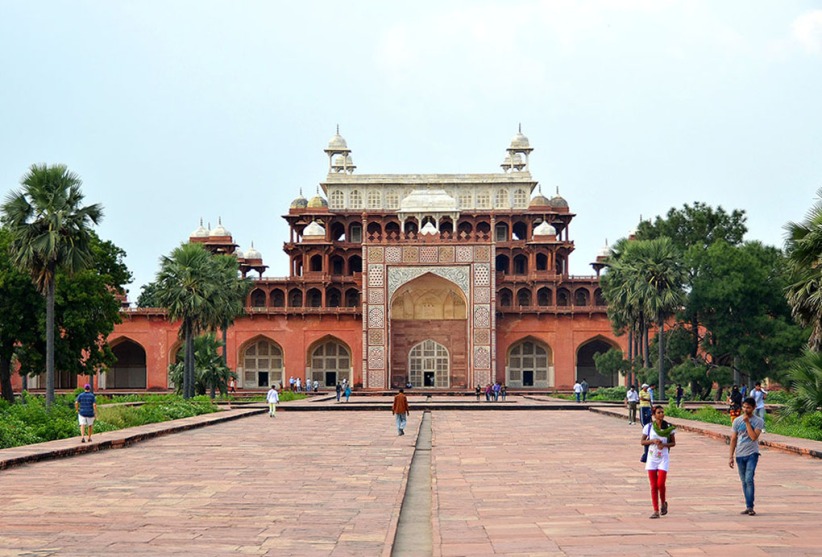 The tomb structure is an eclectic mixture of styles. Note the Indian inspired pavilions and the absence of a central dome.

More From Agra:
The Simplicity Of Perfection
The Incredible Destiny of Mirza Ghiyas Beg

69 thoughts on “The Mausoleum Of Akbar The Great”