“I am a picky non vegetarian” I proclaim to Jon Galdos of Basque Tours as we set out on our pintxo tour in the pedestrian only Parte Vieja (old town). In the course of the evening I have to eat every syllable with each mouthful of the most ingenious finger foods I have ever tasted, whose star ingredients range from octopus to oxtail.

We had popped into some of the same bars that afternoon. But the key, we realise, as we gush over melt in the mouth tender octopus in spicy pimentón vinaigrette with little chunks of quince, is NOT to point and choose from the array on the counter, but ask for freshly prepared especialidad de la casa from their chalkboards.

Five buzzing bars and a considerable amount of Txakoli and wine (and a spectacular baked cheesecake) later, we don’t need more proof that what San Sebastian (or Donostia in Euskara, the Basque language) lacks in monumental sights it makes up for with its extraordinary cuisine.

The city boasts 11 Michelin stars including three of the eleven three-starred culinary temples in Spain! That’s hardly surprising, since it was in the Gipuzkoa region, of which San Sebastian is the provincial capital, that eleven Basque chefs pioneered the Nueva Cocina Vasca (new Basque cuisine) in the eighties based on ‘creativity and experimentation’. 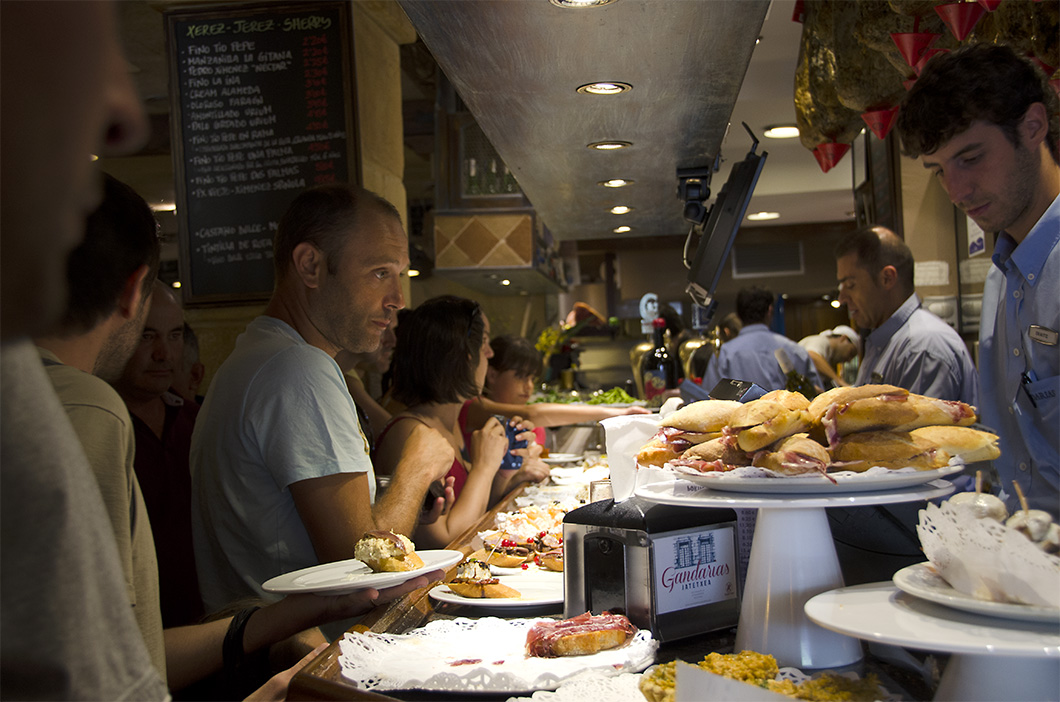 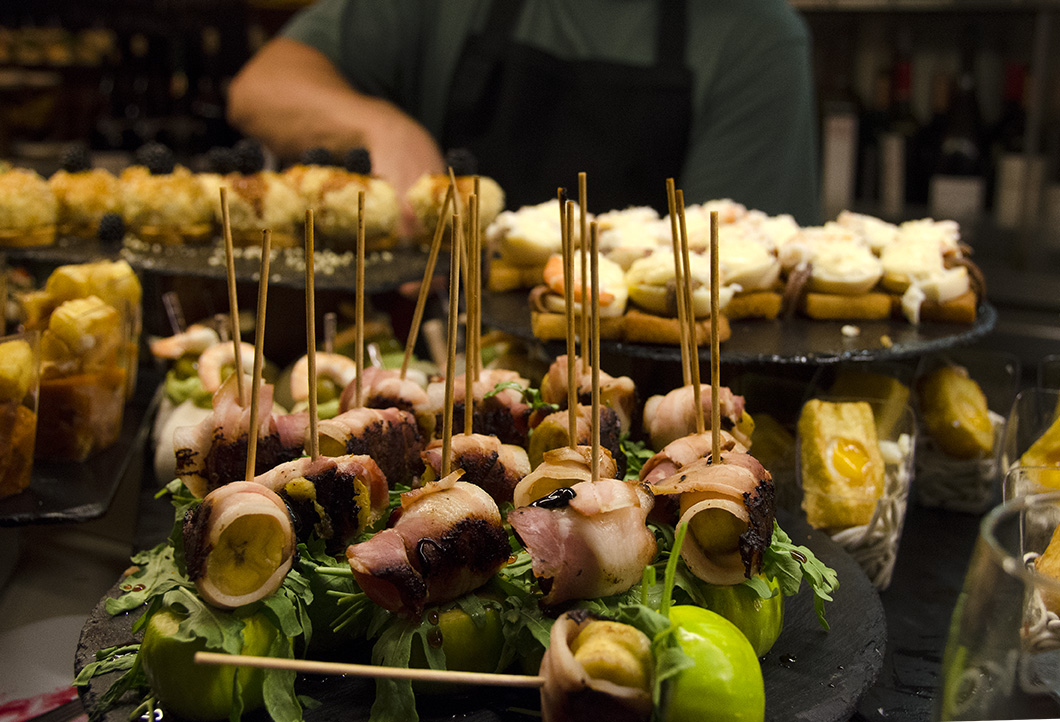 The fact that there isn’t an awful lot of sightseeing to do is actually an advantage and sets us free to enjoy this charming city as it is meant to be enjoyed. Outdoors and on foot. Although we do use buses a lot. Summer, the driest season in a city that sees nearly 200 wet days a year, is also the most crowded.

We steer clear of the narrow alleys of the old town during the day. Mercado de la Bretxa, the covered market right outside our basic but lovely little B&B on the edge of the Parte Vieja, is a favourite haunt. Its stalls packed with the freshest produce: giant mushrooms, fat, green guindilla peppers, still-moving seafood, all vying for the attention of the city’s famed chefs.

The main Calle de 31 de Agosto in the Parte Vieja, the only street that survived the 1813 ‘liberation’ of the city and its subsequent torching by British and Portuguese forces, commemorates that tragic date. The vastly depleted but tenacious population began its resurrection almost immediately.

But the catalyst for San Sebastian’s transformation from provincial town to fashionable resort and to European Capital of Culture 2016 (jointly with Wroclaw), was the 1863 decision by the then Spanish royals to set up summer retreats on the Basque coast. European aristocrats soon followed. And not even the dark shadow of home grown terrorism has been able to derail that journey. 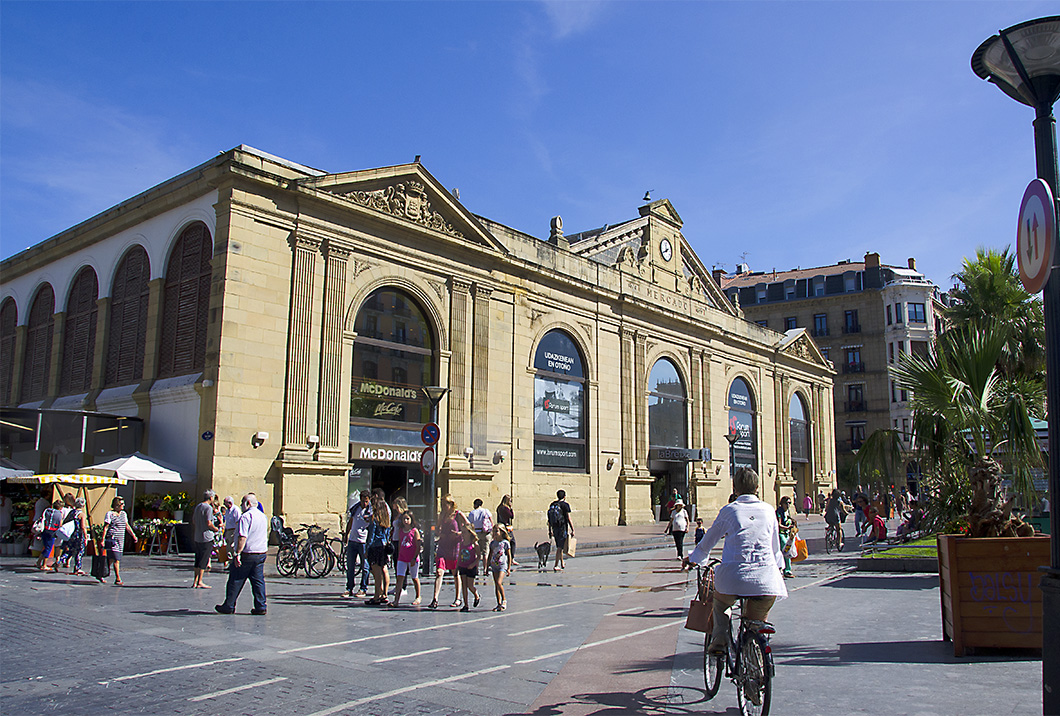 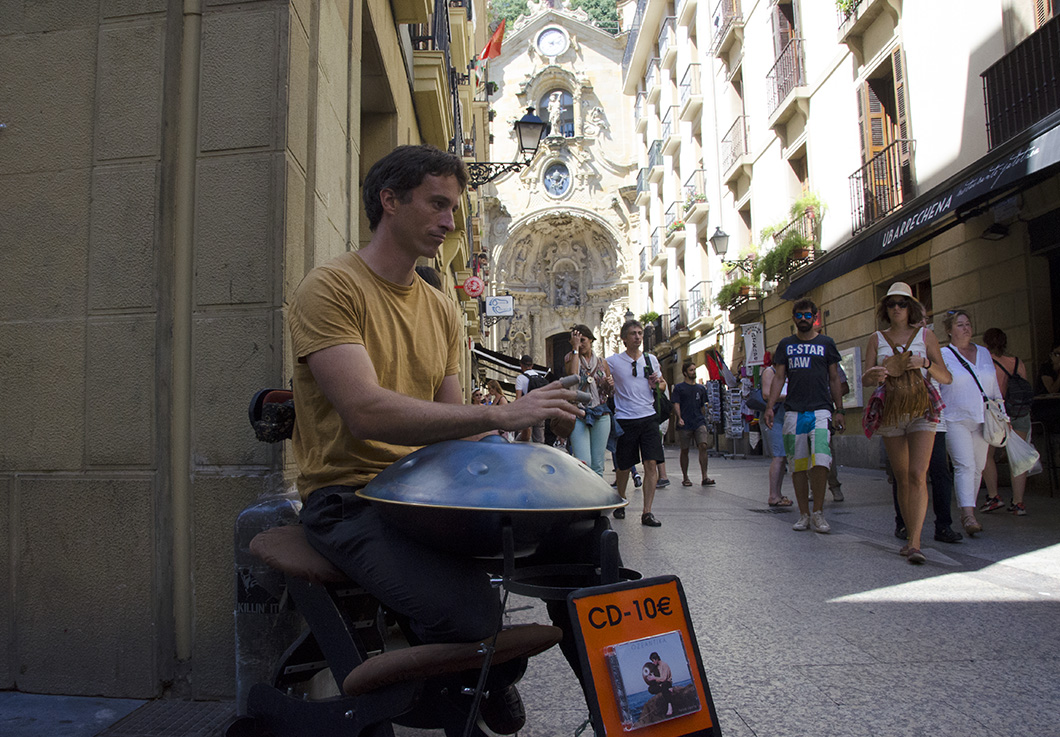 Magnificent bath houses from the period, now in their restaurant and cafe avatars, ring the boardwalk cradling the Playa La Concha, considered the most beautiful urban beach in Europe. The incredible scallop shaped sweep of white sand reminds me of another spectacular urban beach across the Atlantic. As does the statue of Christ of the Sacred Heart crowning Monte Urgull, the wooded headland on its Eastern flank beside the old town.

At the juncture of Monte Urgull and the Parte Vieja is the remarkable San Telmo Museoa that celebrates Basque culture, its history, art and evolution through some excellent permanent and temporary exhibits. Its contemporary extension, juxtaposed starkly against the original 16th century Dominican convent facade and original cloister, was conceived as a symbol of the confluence of nature and urban landscape.

We pasear down the beach promenade one evening to the opposite end, towards Eduard Chillida’s sculpture El Peine del viento (Comb of the Winds), that is nearly as iconic a symbol of Donostia, as La Concha. Disappointingly, it is closed for maintenance.

The funicular station nearby, housed in a lovely Belle Epoque building with rustic stonework and Mansard roof, isn’t. And the panorama from the summit of Monte Igueldo is as breathtaking as we expect if not ‘the best view in the world’. 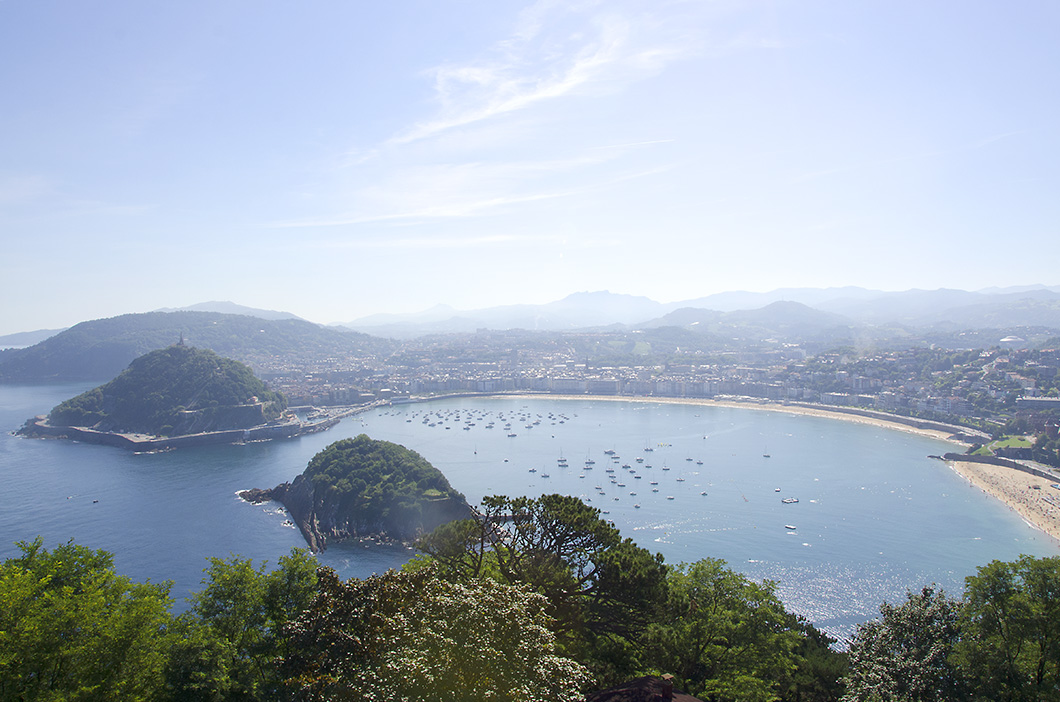 On our way back by bus we get off at the Área Romántica sandwiched between the Bahía de la Concha and the river Urumea. The grand 19th century architecture of this neighbourhood is dominated by the soaring spire of the Neo Gothic Catedral del Buen Pastor. We return here for dinner at Narru that night, our lone average meal of the entire trip. A gin and tonic stop at a very local bar en-route makes up for it somewhat.

On impulse, we hop onto a bus to Hondarribia the next morning. We aren’t in the mood for sightseeing, so we skip the old town for a leisurely walk in the lively marina neighbourhood after a long lazy lunch at Arokka Berri.

Pasai San Juan (Donibane) is another easy and enjoyable excursion from San Sebastian. The unpretentious little fishing town, seemingly unchanged since the middle ages, is a striking contrast to its sophisticated neighbour.

Its claim to fame is the house occupied by Victor Hugo when he lived here in 1843. Donibane is filled with locals this evening, or perhaps they are Donostiarras escaping summer crowds in San Sebastian. A long walk on the path along the bay of Pasaia towards the ruined fortification leads to a busy little restaurant whose grilled sardines live up to recommendations. 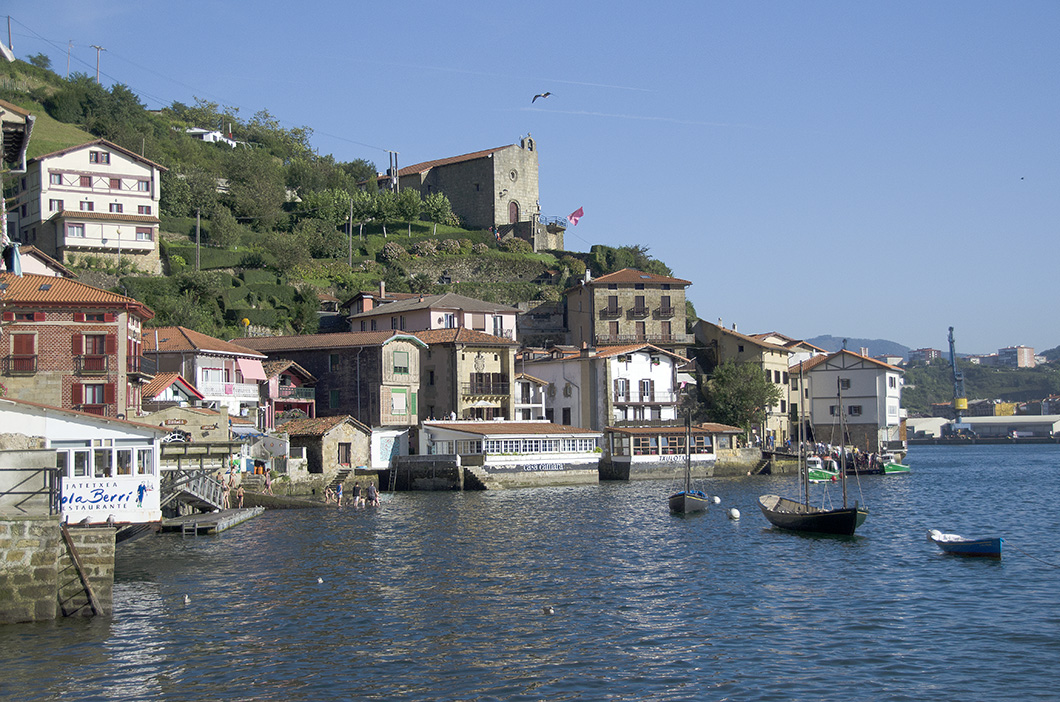 On our last evening we return to the old town for a final round of pintxos, this time at La Cuchara de San Telmo in a lane adjacent to the museum.  It is crowded, crammed three deep at the counter. We know what to order now. And our Euskara is a few words stronger.

“Kaixo!” I smile confidently as I expertly edge forward and claim a square foot of counter space. The delicately caramelised scallop is sublime. The foie gras topped with apple compote silky smooth.  The veal cheeks juicy and flavourful.

We take a circuitous route back, past Calle de 31 de Agosto and its many tabernas spilling laughter and light onto the pavement and around the now relatively deserted promenade, wondering all the while if we should have done this trip in reverse, kept San Sebastian and Getaria for the last.

The bar is set high for Bilbao. On the everyday food scale at least.

BASQUE COUNTRY ON YOUR RADAR? PIN 📌 FOR LATER

60 thoughts on “In Basque Country – Best Things To Do In San Sebastian, Spain”