The fact that San Sebastian is home to two of the top 50 restaurants in the world and boasts more Michelin stars per capita than any other city is an indication of the Donostiarra passion for food.

That many residential complexes come fitted with state of the art community kitchens in lieu of gyms or swimming pools is even more telling. As are the numerous sociedad gastronómica (also known as Txoko): male only gourmet clubs where members get together to socialize and discuss, yes, food! Membership is hereditary.

Interestingly, the companies of drummers in the annual La Tamborada festival are entirely made up of representatives of these societies. They usually dress up as soldiers and cooks.

Our expert local for the evening, Jon Galdos of Basque Tours, showed us around the premises of the club he belongs to while providng fascinating insights into its origin and the honour system they follow in its use and maintenance. Members take turns cooking gourmet meals for family and friends on weekends and on special occasions.

Hardly surprising, therefore, that almost every taberna in town dishes up the freshest, most ingenious pintxos that would not be out of place in the top restaurants of the world.

The culture of miniature tapas arrived in San Sebastian with the influx of Spanish aristocrats in the 1930’s. Along the way, the tapas tradition morphed into something intrinsically homegrown.

The anchoring slice of baguette was swapped for a fine stick (pintxo) pierced through quintessential Basque ingredients in place of the ubiquitous ham and cheese. Another distinction is that while Spanish tapas originated as a complimentary snack served with drinks, pintxos were always freshly prepared and never free.

The ambience in the pintxo bars, although fun, is far from refined. It is self service only. Plates are sometimes chipped. The floor traditionally littered with crumpled paper napkins.

But the food is haute cuisine. Everyday gourmet at a fraction of the price.

NO TIME TO READ NOW?
CLICK TO PIN 📌 FOR LATER

But the key, we realise, is NOT to point and choose from the array on the counter but ask for freshly prepared especialidad de la casa from their chalkboards. And the house special here, we learn later, is pigs nose! Their foie comes highly recommended as well and they have a mean selection of wines. 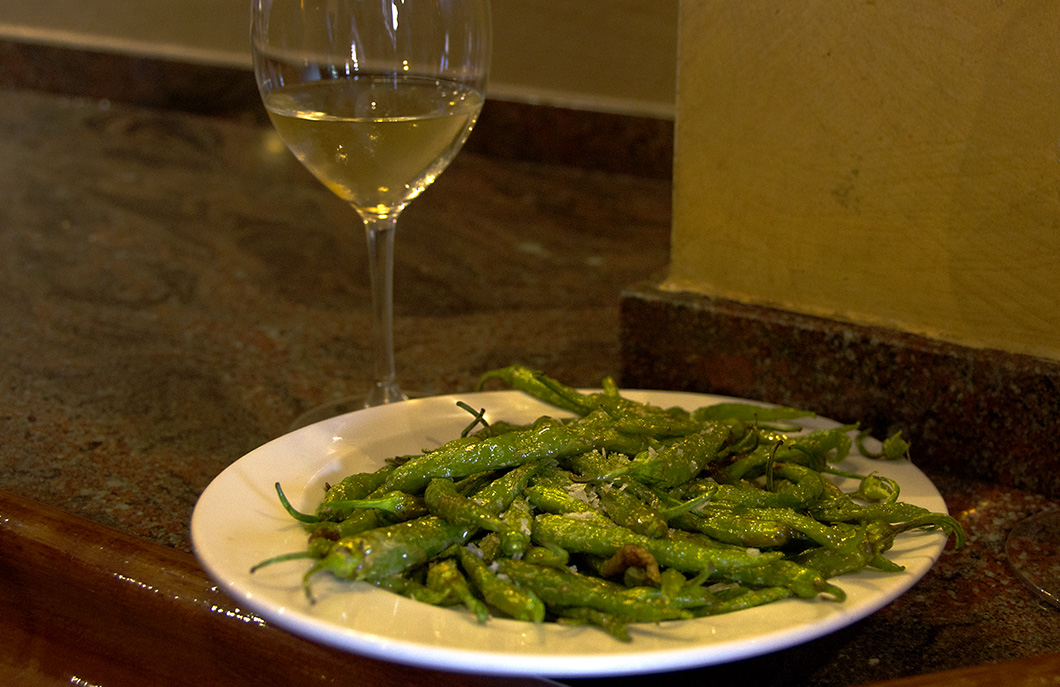 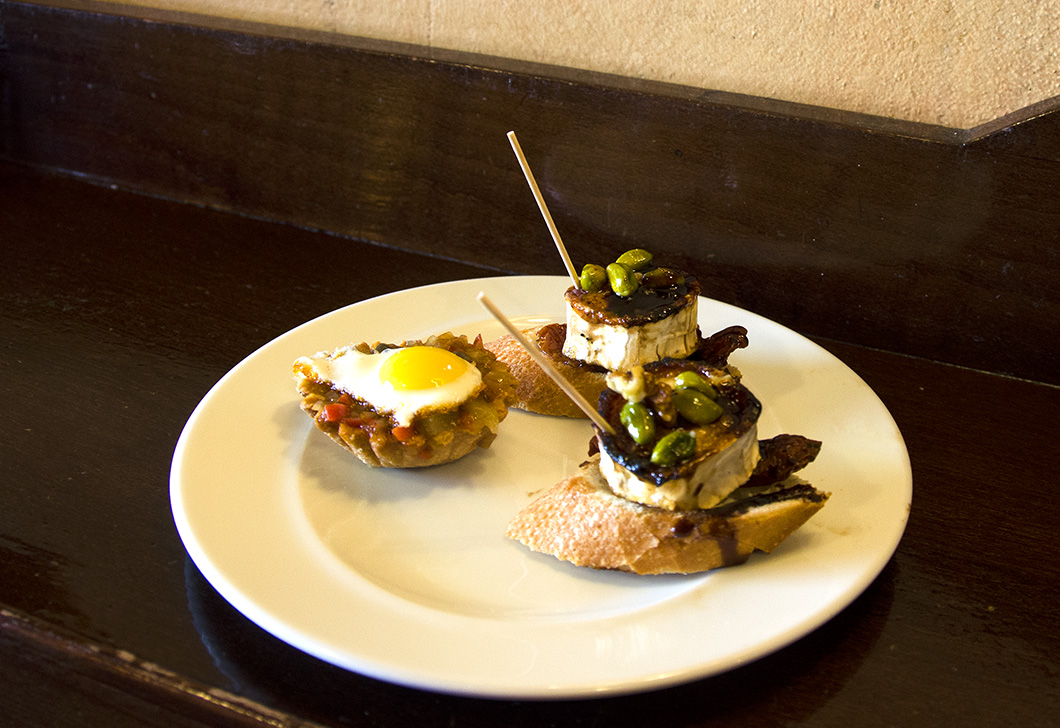 This experimental bar was the first stop on our pintxo tour with Jon. The pulpo en vinagreta ahumado (smoked octopus in pimentón vinaigrette, with chunks of membrillo), was pure heaven. And I don’t even like octopus! It was cooked to perfection…melt in the mouth tender with just the right amount of spice and tartness. Paired with a light Txakoli. 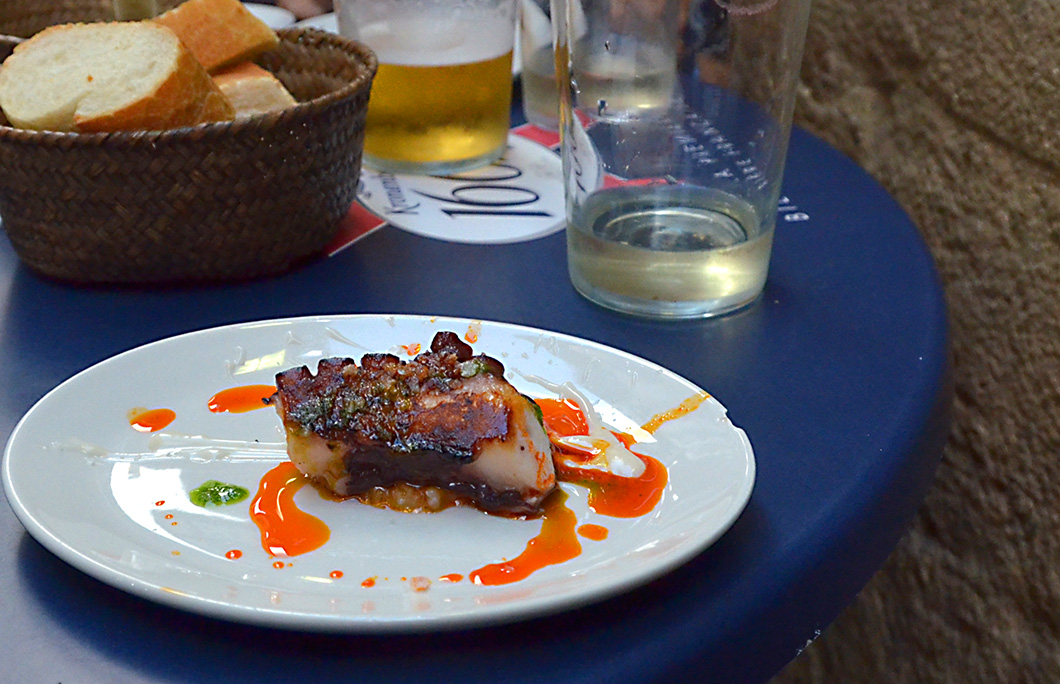 A hip bar that attempts molecular gastronomy techniques and as you can see, suitably elaborate presentations. We tried two of their specialidad de la casas:

La Hoguera (bonfire): a thin slice of skewered fresh bacalao (codfish) on a mini grate to be seared to preference on each side then placed on the accompanying bread and parsley cream before popping in the mouth. Followed immediately by the test tube shot of ‘salad’ essence!

The less complicated ‘Rosa de Bogavante‘ was a piping hot butter, garlic sautéed lobster ‘rose’, topped with light mayonnaise and attached to a crisp green cracker ‘leaf’ sticking out of a container of rose infused liquid (not drinkable!) with dramatic white vapour wafting out of it! It wasn’t all spectacle though. The flavours exploded in our mouths. I could easily have eaten a dozen. 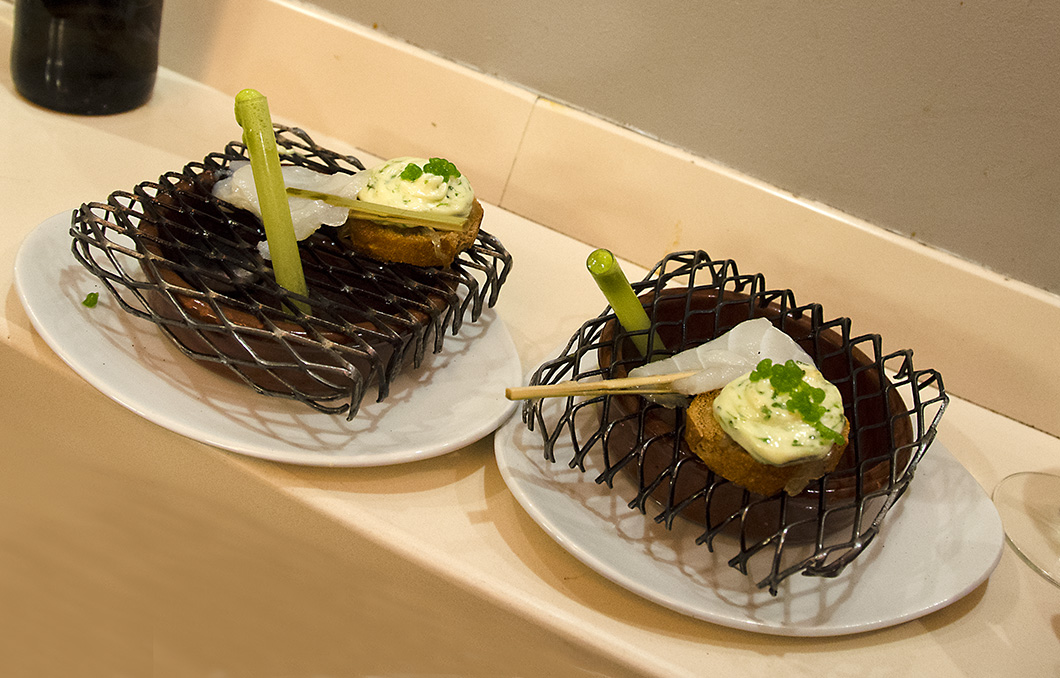 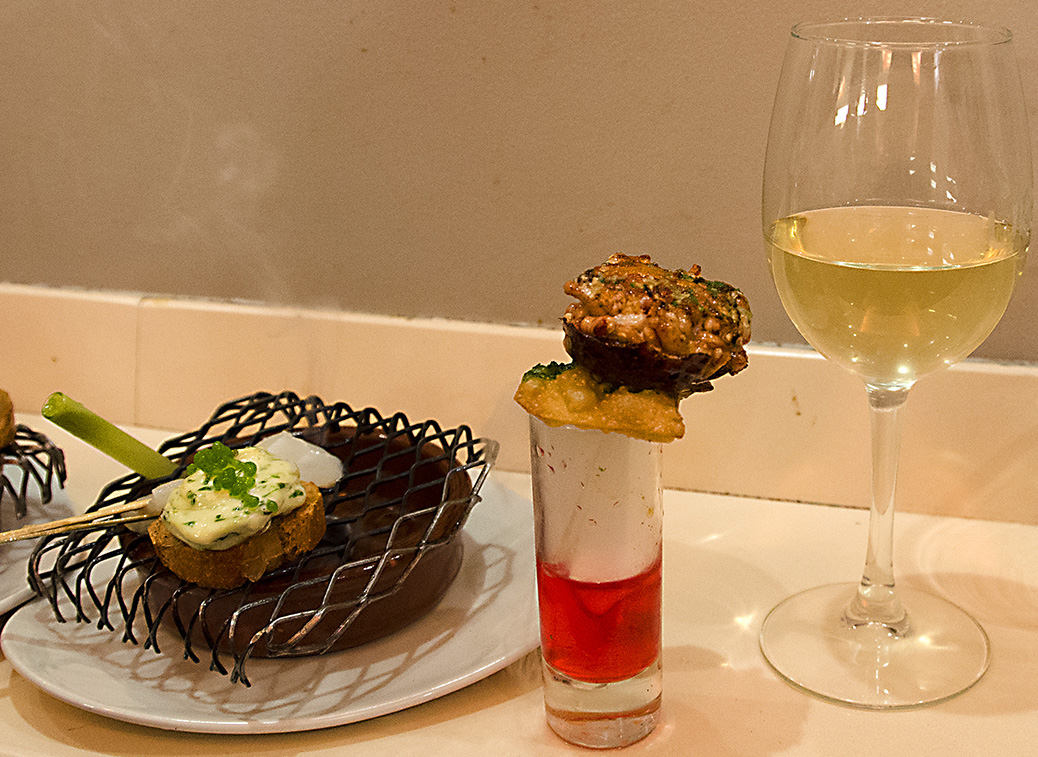 This very popular bar has the most enviable corner location, with a terrace facing the Basilica of Santa Maria. We had written this off as too touristy that morning but the beautifully grilled merluzo (hake) served over a red spicy sauce, and the little bowls of grilled mushrooms topped with soft cooked, runny yoked eggs (no photo, but possibly my favourite of the evening) were both delicately balanced and full of flavour.

This is a small, atmospheric bar on a corner of the arcaded bull ring turned Constitution Square, with enough crumpled napkins on the floor to certify its popularity. The hot specialities were astelana rabo de buey (the most tender oxtail) and txipirón plancha (grilled squid). 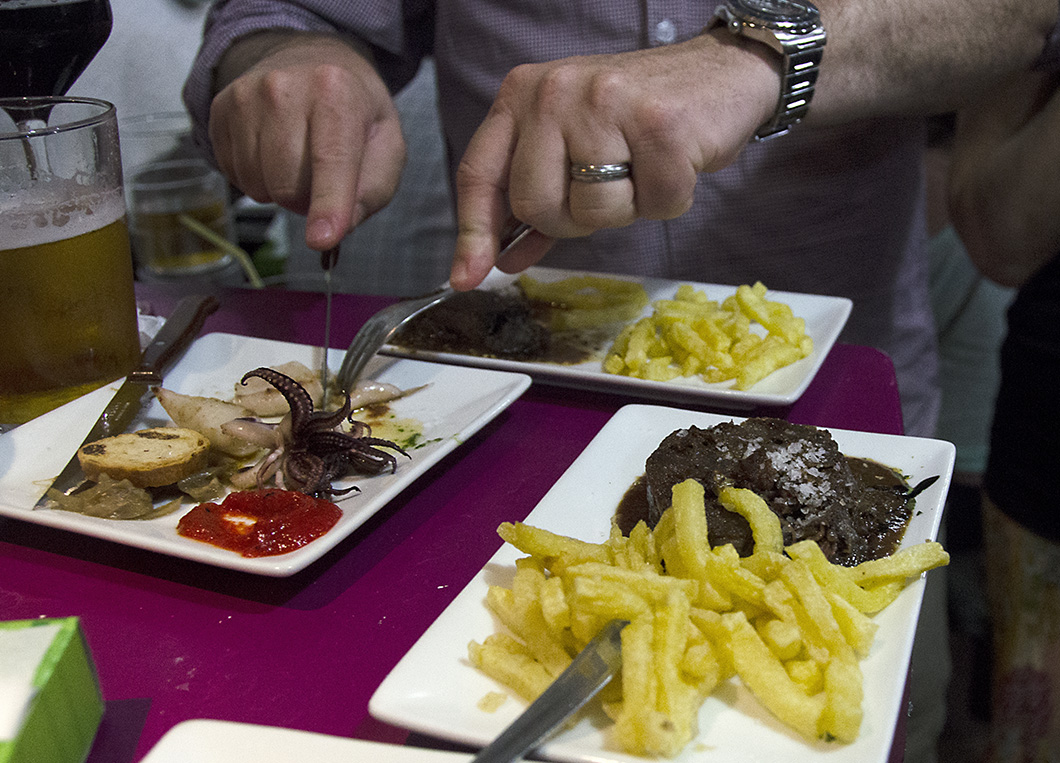 That cheesecake was all it was feted to be. Even some New Yorkers sharing pavement space with us couldn’t stop raving about it. Be warned, portions are huge. We shared three between the six of us, and it was way much. 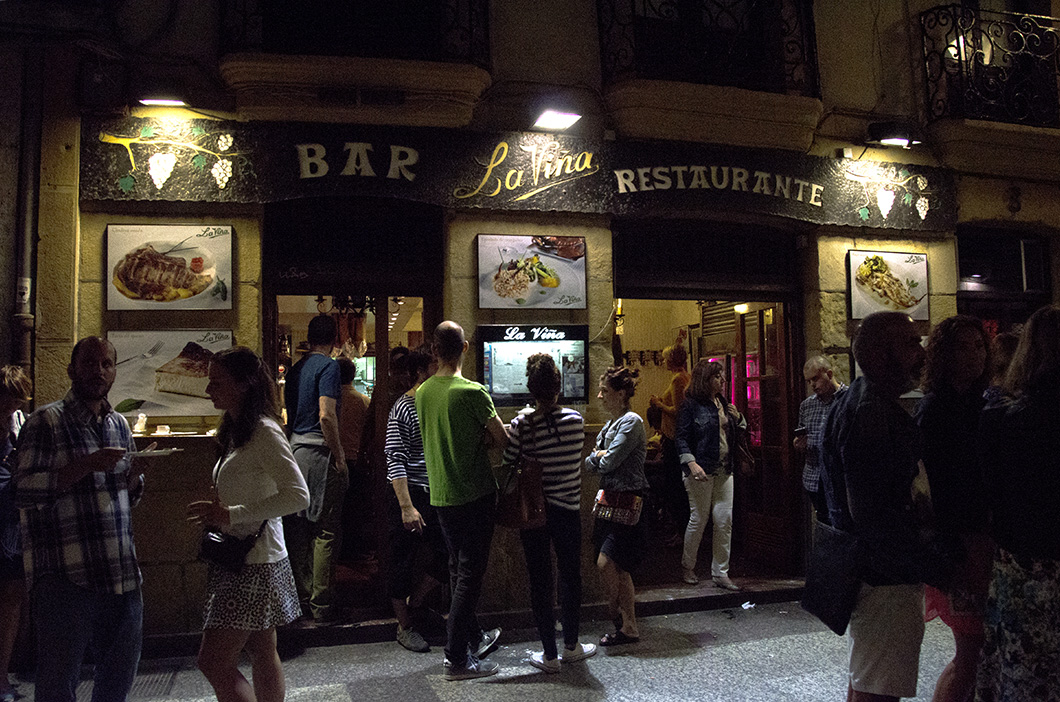 We returned on our own to this simple little bar on everyone’s must visit list that does not do pre-made pintxos at all. One orders from the specialidads listed on the chalkboard. Our Euskara was a few words stronger by then but it helped that the young man behind the counter could speak fluent English. 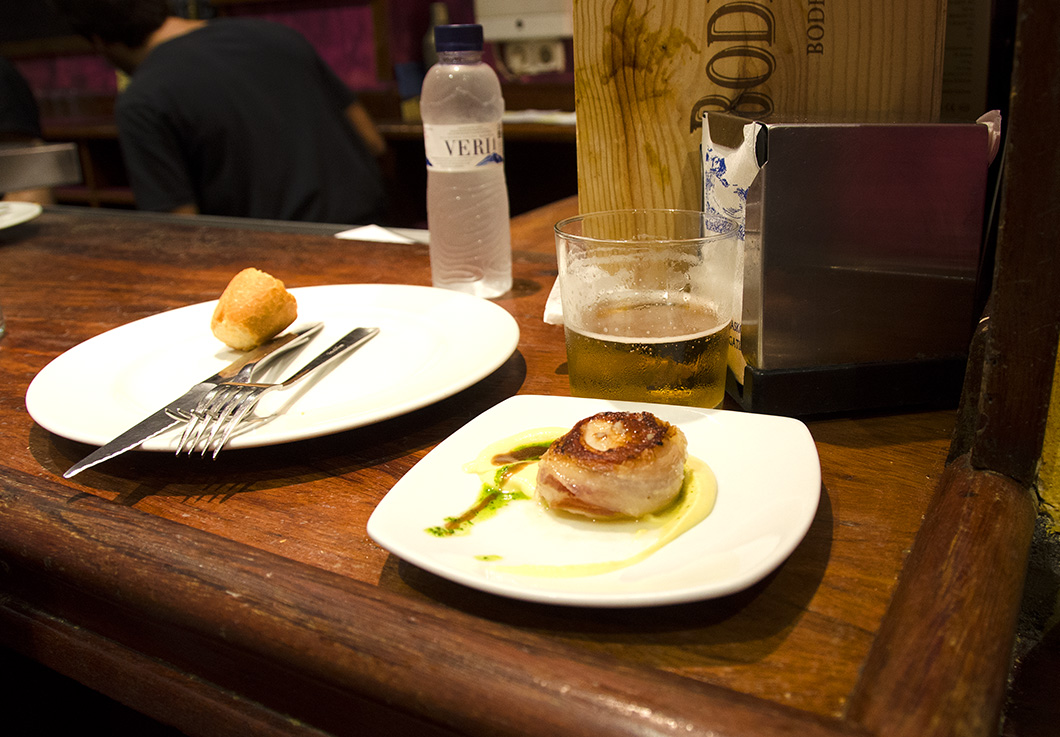 Thank you for joining me on my Txiquiteo*. Are you checking fares to Donostia/San Sebastian already?

BASQUE COUNTRY ON YOUR RADAR? PIN 📌 FOR LATER

24 thoughts on “Passion For Food – The Best Pintxos In San Sebastian, Spain”