Water – as life giver and as a symbol of purity – is an essential component of religious rituals like baptism and ceremonial cleansing.

For a religion that derives its name from a river – Sindhu, from the Indus – water takes on a whole new meaning.

No Hindu temple is complete without a pushkarini or temple tank. Many tanks have natural sources beneath that are invariably believed to spring from the Ganges itself. The oldest ones, along with ancient step wells, were built to sustain entire populations, and led to the demise of empires when their supply systems failed.

The holiest of Hindu shrines are almost always situated on the banks of even holier rivers. Each (river) worshipped in a divine feminine incarnation. The point of confluence of any three rivers is believed to be the most sacred of all, where some of the super sacred Kumbh festivals are held, and where most Hindus wish their ashes consigned.

India boasts many magnificent rivers, but the Ganges rules high in the river pantheon in its sin washing capabilities. Tiny sealed copper pots of Ganga water were ever present in my childhood home, to be used in the event of someone’s sudden passing. It would be mixed with fresh well water and holy basil leaves and poured into the deceased person’s mouth. I remember my curiosity about its shelf life, and being berated by my grandmother for questioning the purity of Ganga water. I believed her implicitly until I laid eyes on the defiled body of Ganga in Varanasi.

There is no better place than a major river ghat – the steps leading down to the water level – for the inveterate people watcher. Take this scene from one of the ghats of the Hoogly (a tributary of the Ganges that flows through Kolkata) near Dakshineshwar, just outside the city. 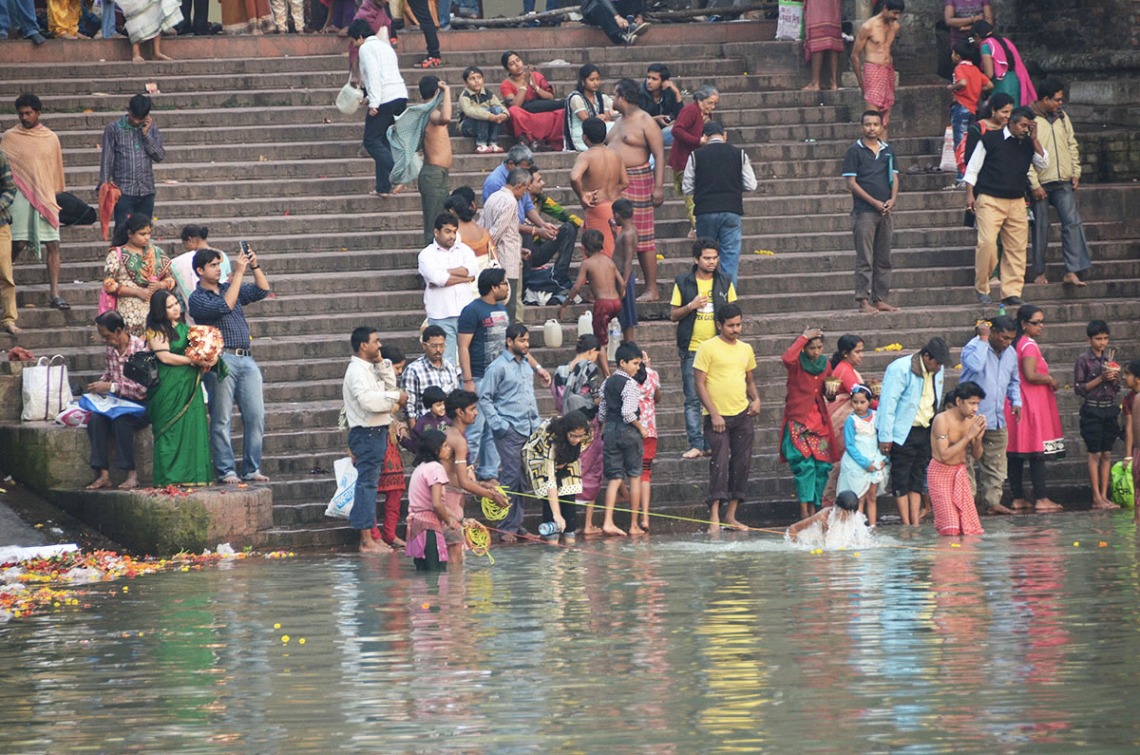 You have the devout worshipper, the mobile phone addict, the selfie poser…..and the people watcher. What grabs my attention in this fascinating evening tableau, however, is the group of children in the forefront. They are fishing for coins with magnets attached to strings.And in plain view of those that made the coin offerings in the first place!

That is enterprise. And it is that, rather than the devotion and the ritual, that intrigues me and gives me hope.