I am not a temple goer.  I find the energy and fervour and the attendant din of a crowded temple distracting. Rare visits on special occasions are more nostalgic concessions to tradition, rather than opportunities for communion with God.

But the vibe at each of the three temples that constitute the UNESCO inscribed ‘Great Living Chola Temple‘ ensemble was different. And visiting these sublime monuments during Shivarathri – the most important Saivite festival celebrating the birth of Shiva – elevated the experience to another level. 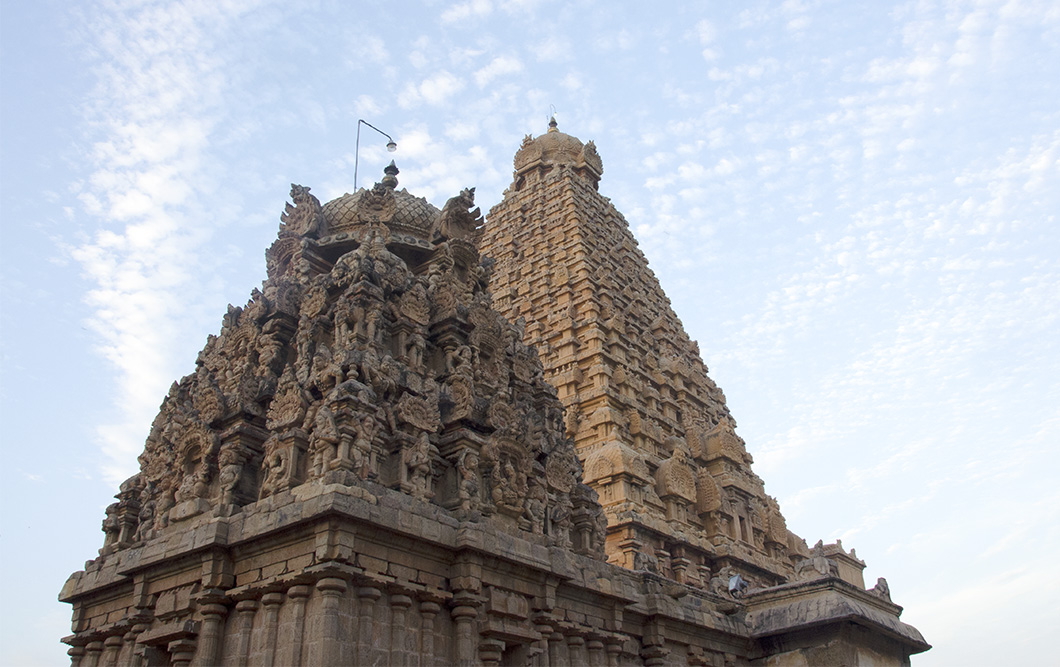 Also referred to as Periya Koil (Big Temple in Tamil), this is the most magnificent of the three, perhaps of all temples in India.

It was consecrated in 1010 AD by Raja Raja Chola I, to commemorate his extraordinary military exploits. And possibly funded by war booty from Lanka. Its scale and grandeur and its name – then Raja Rajeswara (Eswara = Shiva) – proclaim the power and the divine status of the victorious emperor.

This is also the oldest among the greater Dravidian temples and the most refined. It is encompassed by a colonnaded perimeter wall and approached through two monumental gateways across the now dry moat. Both gates are topped by intricately carved gopurams (gate towers).

The dominant feature of the principle shrine within the complex is its spectacular 63 mtr high vimanam (spire/tower). It is crowned by a cupola comprising two huge sculpted granite blocks that indicate engineering prowess far ahead of the time.

The pyramidical tower is reinforced on the inside by a secondary vertical support, both resting ingeniously on a pair of concentric walls around the sanctum housing a gigantic lingam (the phallic representation of Shiva).

Fine frescoes – Maratha era as well as recently discovered and restored finer Chola paintings beneath – cover the surfaces of the two storey high cicumambulatory corridor formed by the parallel support walls. Entry to this space is now restricted in order to preserve the decaying artwork.

The enormous monolithic Nandi (Shiva’s bull mount) in a smaller shrine opposite, is a later replica. The slightly smaller and more beautiful original, sits forlornly in a corner of the peripheral wall to the left.

I visited the Big Temple twice; on the evening on the day of my arrival in Thanjavur , and on the morning after Shivratri on the day of departure. And it was thrilling to be able to witness and participate in traditions that have been in practice without break for over a thousand years.

Rajendra Chola I, who had assisted his father in his military campaigns, nursed grander imperialist ambitions. He quelled rebellions by the Sinhalese in the south and the Chalukyas to the west, and then marched northwards vanquishing the Kalinga, Vali, Odda and the Pala kingdoms along his way to the Gangetic plains.

He went on to extend the Chola empire all the way to Burma, parts of present day Indonesia, Malaysia, Thailand, Cambodia and Singapore, significantly influencing the culture and commerce of the region.

His conquest of the Gangetic plains merited a brand new capital, grandiosely named Gangaikonda Cholapuram (City of the Chola who brought Ganga home), and a temple that almost rivalled that of his great father.

Some believe that the temple, completed in 1035AD, was deliberately conceived as a smaller, feminine complement to the great temple of Thanjavur out of filial respect. The sculptural detailing is far more elaborate, however, and the 4m tall iconic lingam occupying the sanctum, the largest in Tamilnadu.

The Nandi, made of stucco unlike the monolithic solid stone sculptures of the other Shiva temples, is designed to reflect sunlight directly into the sanctum. The entrance gate is missing its gopuram, its stones appropriated during the British Raj for the construction of a dam.

A huge reservoir nearby – the Chola Gangam – signified a ‘liquid pillar of victory’. According to one story, every king defeated in battle by the Cholas was ordered to symbolically empty a pot of sacred Ganga water into it on the grand event of its consecration.

The once glorious capital is today reduced to a dusty village surrounded by the barely discernible ruins of a palace. It is somewhat incongruously named Jayakondan (he who gained victory). The Brihadeeswarar temple remains the sole purveyor of the stories and the forgotten legacy of the Master of the Ganga.

Darasuram is a corruption of Raja Raja Puram, the name of yet another Chola capital set up by the 12th century monarch, Raja Raja Chola II,  in the existing temple town of Palaiyarai. Its presiding deity – Airavatesvara (protector of Airavata) – gets his name from a legend in which the pristine white elephant of the king of the Gods (Indra) prays to Shiva at this site seeking redemption from a curse that changed his colour.

While relatively smaller in size with just a 24 m high vimanam, this stunning temple is standing testament to the excellence and refinement of Chola art.

A mahadwara (great entrance) leads to a sunken courtyard with the Nandi shrine, whose stone steps are said to produce musical notes. The temple is accessed through a second royal gate with  a restored gopuram. Several mandapams (pillared halls) precede the main sanctum with a beautiful silver embellished lingam. The southern side of the mandapam is in the shape of a chariot led by elephants and horses.

The detailing is exquisite. Seated mythical yali figures form column bases. The plinth is adorned with a series of friezes depicting legends and scenes from daily life including a (standing) childbirth scene.

A 73 panel depiction of the lives of Nayanars – the 63 Saivite saints whose teachings were compiled by the great Raja Raja I into a twelve volume compendium of hymns called Tirumurai – is considered one of a kind. I wished I had more time to study these sculptures in detail. But I was equally impatient to return to Thanjavur to hunt down some long forgotten historical relics.

The Great Living Chola temple circuit is best explored from Thanjavur, just over six hours by road from Chennai via the Kanyakumari road. Add another hour and a half if driving from Bengaluru.

The closest airport is Tiruchirappalli, commonly referred to as Trichy. (58 km. Approx. 60 min. by road)

Darasuram is about an hour by road from Thanjavur (35.7 km) just short of Kumbakonam. Best combined with the temple town.

Gangaikonda Cholapuram is roughly two hours from Thanjavur (72 km) in the same direction, and although both are easily done in a single trip, it is advisable to spread it over two visits if you want to linger in each.

BEST TIME TO VISIT THE TEMPLES

Mid December to mid March is ideal. Tamilnadu receives the highest rainfall during the north west monsoons between mid October and mid December. The roads to the temples can get damaged and the temples themselves can sometimes get inundated. I know of friends who returned without entering Airavatesvara when they found the sunken courtyard filled with ‘dubious brown water.’ Summer months are hot across much of the lower plains of the state.

Private vehicles or taxis are easily organised by your accommodation once you get there.

Svatma Thanjavur was a great place to stay. Read my review here. Or look for more options to suit your budget.

DISCLAIMER: My visit was made possible by Svatma Thanjavur. The Urge To Wander is part of the affiliate programs of some of the resources mentioned on these pages and will earn tiny commissions from qualifying purchases without any extra cost to you. Disclosure policy.

THANJAVUR ON YOUR RADAR? 📌 PIN FOR LATER