To my mind, it is the long preparatory trek through the narrow path – the 1.2 km gorge called the Siq – that lays the groundwork for the dramatic unveiling of the city of Petra. 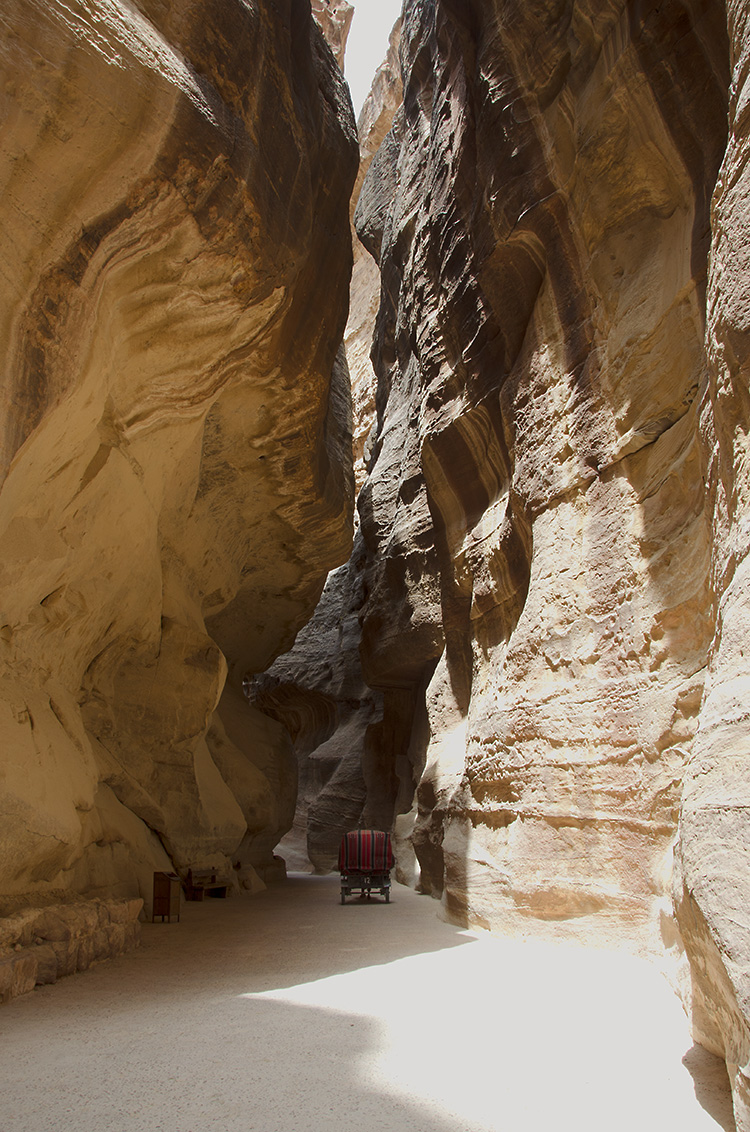 A natural geological fault eroded smooth by sand, water and wind, and with walls of up to 182 metres (600 feet) high, this is the grand entrance to the city. once topped by a triumphal arch. Interspersed with eroded shrines and votive niches, it narrows to less than 3 metres at some points and as you turn into the final bend, you come upon with breathtaking, unexpected suddenness, the marvellous Al Kazhneh! 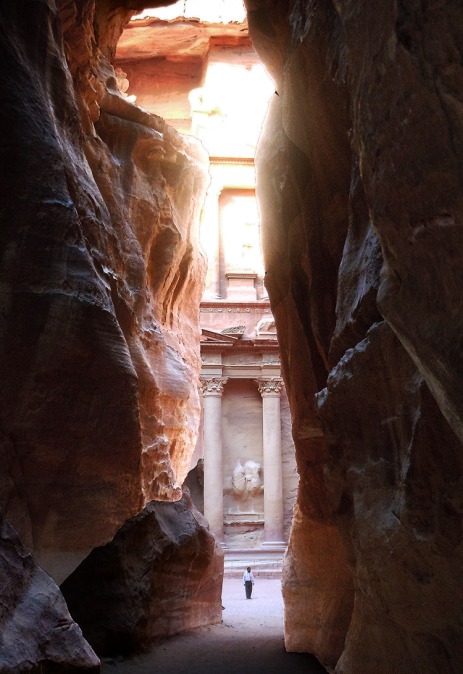 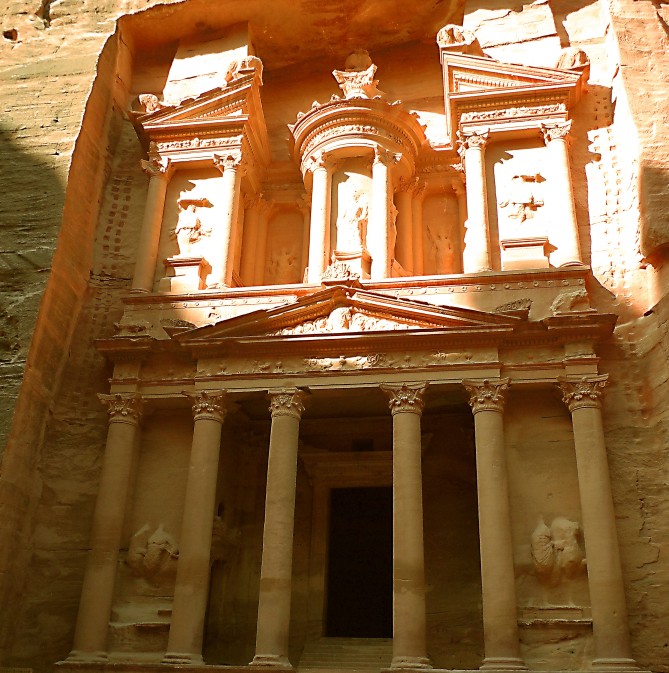 Was it a tomb? A temple? A library? Its uncanny resemblance to the facades of well known libraries like the one in Ephesus and the similar floor plan, make the latter highly plausible. But no one really knows for sure. The Tholos or urn at the top was rumoured to have held the Pharaoh’s treasure – hence the name – but that wasn’t proved either.

The unanswered questions add to its mystique. As does the sunlight suffusing its facade like a floodlight tracing its length top down. The best time to witness that? Around nineish in the morning.

When you have pushed your jaw back up after that first sighting, just grab a chair in the cafe opposite and sip some sweet spiced tea until the entire monument is illuminated.

Then wander off into the bowels of the incredible Nabatean city to seek out more of its equally impressive, if less dramatic treasures. Every single one underscoring the ability of this remarkable nomadic Arab tribe to control and channelise water, and build a showpiece worthy of any Hellenistic neighbour……tombs, temples, theatre and all! Not built up from the ground, but every inch hand hewn from the surrounding pink sandstone. Most, as early as the 1st century AD! 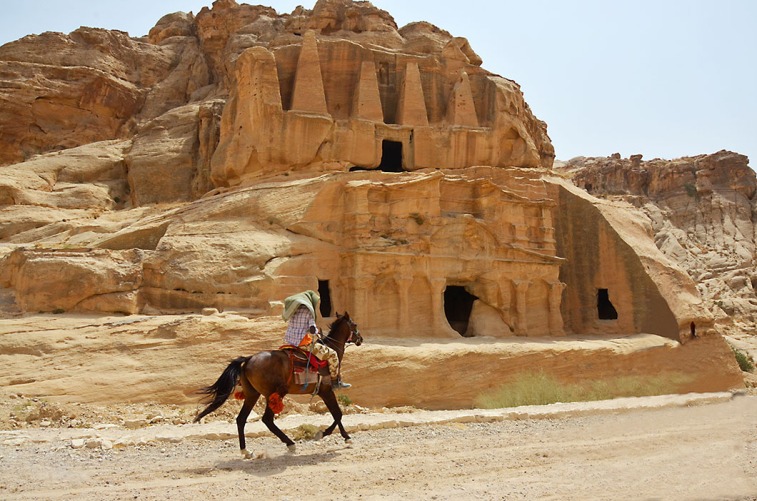 The Obelisk tomb (above) is one of the first prominent structures enroute to the Siq from the visitors centre. Beneath is the Bab al Siq Triclinium – a dining hall used for ritual feasts. 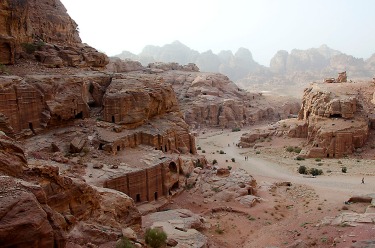 View of the valley of tombs from mid way to the ‘High Place of Sacrifice. We aborted our hike due to lack of time. 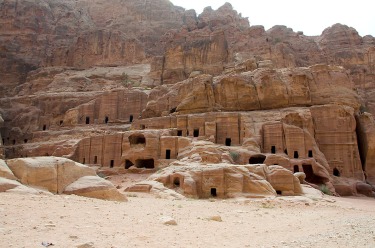 Residential caves identified by the lack of ornamentation reserved for the afterlife! 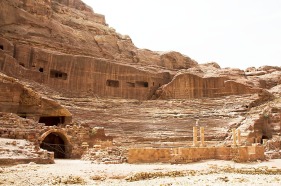 The Corinthian Tomb is said to be a replica of Nero’s Golden Palace in Rome! 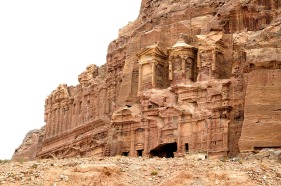 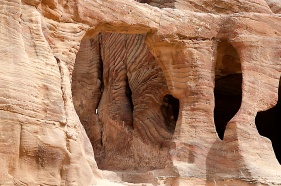 The striated interior of one of the caves

When you are done exploring the striated caves and tombs, ascend the 800 or so steps, or take a heart stopping mule ride up to the inaccurately named Monastery (Al Deir) – the largest monument in the city. A hike well worth every effort and sore muscle. 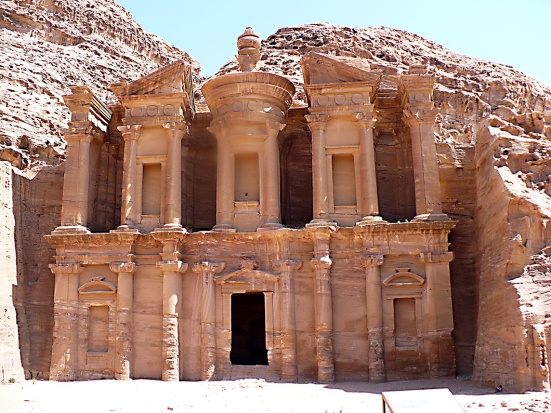 The Monastery or Al Deira 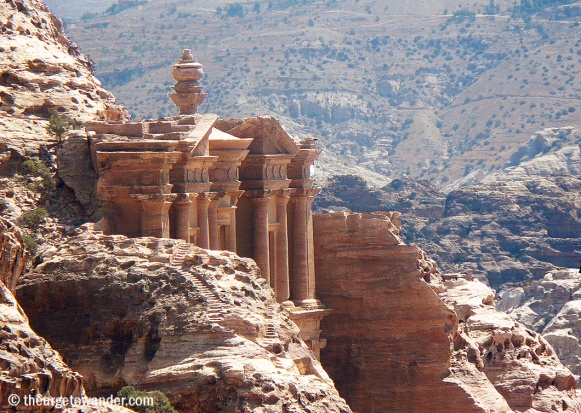 View of valley beyond the monastery

Petra’s inhabitants – the Bedul (gypsy) Bedouins – have been living in caves inside the site for centuries. Although technically relocated to Umm Sayhun, a neighbouring village, where they have been provided housing and modern amenities on condition that they are the only people allowed to work inside the UNESCO site, most assert this is, and will always remain, their true home. They subsist on tourist dollars and some claim they return to their cave homes when the tourists leave.

Many thanks to the Jordan Tourism Board for making this post possible.

While you are here, do take the time to read the history and legends of another historical monument on the Kings Highway.