Uzes was an impromptu stopover on our way to the Pont du Gard, part of the 1st century Roman aqua-duct, built to supply water to Nimes. This lovely medieval village in the Languedoc province, lies at the source of the Fontaine d’Eure and is the starting point of the aqua-duct.

The first thing that catches your eye as you arrive, is the iconic symbol of Uzes, the Tour Fenestrelle, also referred to as the ‘Window Tower’ because of its unique paired windows. A free standing circular tower reminiscent of the Leaning Tower of Pisa.

The 42 metre high Romanesque structure is the bell tower of the cathedral of St. Théodorit. The 11th century cathedral that houses the relics of the saint, was rebuilt in the 17th century and the tower is the sole remnant of the original structure.

And supposedly the only round bell tower in France! (Couldn’t find much conclusive evidence online to support that claim, except for the fact that round towers are uncommon in France.)

The Romanesque facade of the cathedral was added in the 19th century, but the 17th century organ is still in use and organ festivals are held here every summer.

Although we missed the famous Saturday market, the little lanes radiating from the charming central square – the Place aux Herbes – were enticing and we spent a very enjoyable few hours exploring them and browsing the little textile and craft shops.

Our enjoyment came at a price however. By the time we were ready to set off for our original destination – the Pont du Gard – we got caught in a sudden downpur, and were forced to abandon our plans and return to Avignon.

We never made it back to the Pont du Gard. 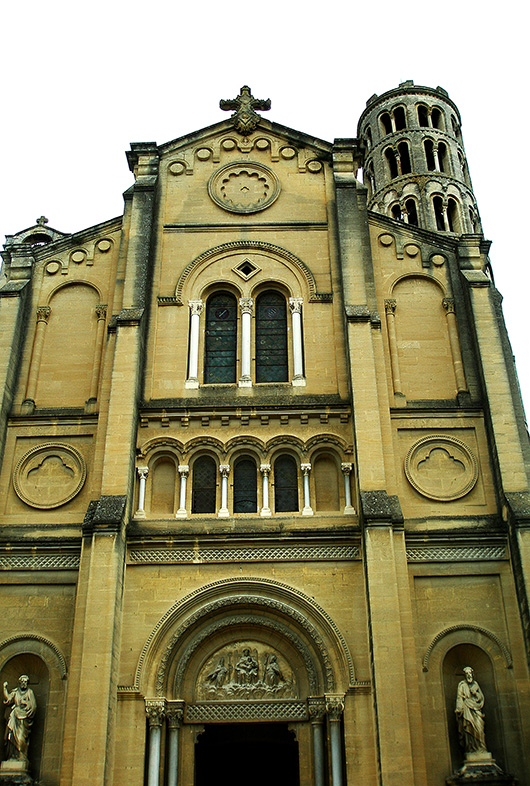 76 thoughts on “France – The Window Tower Of Uzes”