Once upon a time, an Indian prince named Khambu set sail Eastward to become the object of affection of a Naga princess, Mera. They married, and from their union was born the Khmer (Khambu + Mera) and the kingdom of Kampuchea (Khambujas = sons of Khambu).

This legend of creation is flawed however, since the history of the indigenous people far predates the alleged arrival of Khambu in the first century AD. 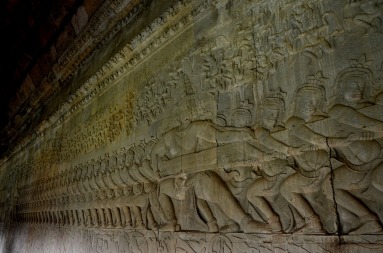 The famous churning of the ocean of milk by Devas (Gods) and Asuras (demons) According to Angkorologist Eleanor Mannikka the 91 Asuras mark the 91 days between the winter solstice and spring equinox in March, while the 88 Devas represent the 88 days to the summer solstice after the equinox period!!

Whether it was Khambu or later merchant princes that introduced Brahminic customs, religion and the written languages of Sanskrit and Pali to Cambodia, they prompted a fusion of local and borrowed cultural traditions that gave birth to a unique landscape of art and architecture.

Stretching over 400 square kilometers, the Angkor archaeological park is a magnificent chronicle of that evolution. And of the journey of the Khmer princes from petty rulers to God Kings (Devaraja’s).

Angkor Wat (temple city) dedicated to Vishnu – a deviation from the earlier Shaivite temples – marked the zenith of that period of architectural perfection. It remains the largest religious monument in the world.

Built in the early twelfth century by King Suryavarman ll, and possibly known then as Preah Pisnulok (world of Vishnu), Angkor Wat was conceived as a harmonious synthesis of divinity, astronomy and architecture. Its every measurement embodying the Hindu cosmos.

Aaah! The allure of the Apsaras! 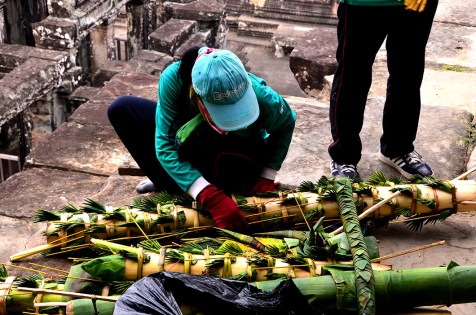 Preparations for some religious ceremony on a terrace on the top level.

A corridor with beheaded Buddha statues. The heads, easier to cart away than the entire statue have been looted over the years by antique hunters.

The lotus bud towers, once clad in gleaming gold, represent the mythical Mount Meru, (abode of Bramha) and the centre of the universe. Its gigantic 200m wide moat, the cosmic ocean.

On the spring equinox, the sun appears to rise from the central tower that once held a colossal idol of Vishnu, cast in the likeness of the King. Thus deifying him and symbolising his divine right to rule.

Its very unusual orientation to the West, and the anti-clockwise order of the bas reliefs, suggests that this might have been built as a funerary temple. But it is now believed that Suryavarman, whose name means ‘Protected by the Sun’, was just paying homage to hie divine benefactor. 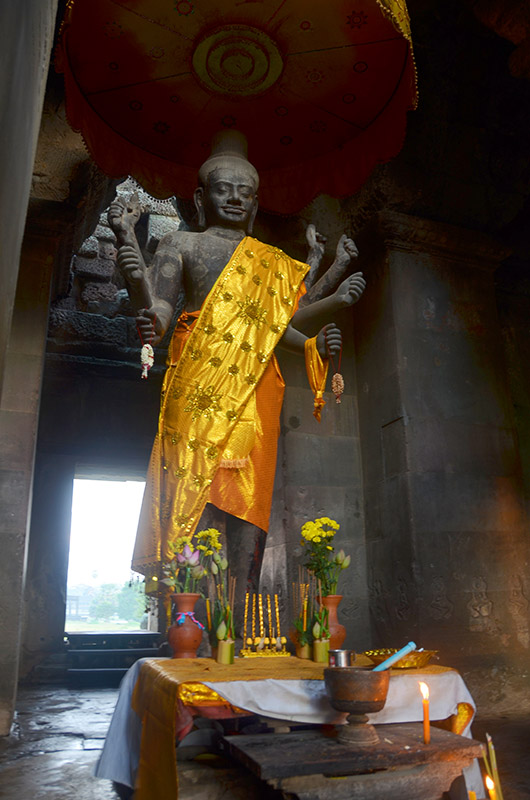 In the western entrance of Angkor Wat stands this gigantic statue of Vishnu, known locally as Ta Reach, revered by Hindus and Buddhists alike for its representation of the ‘King of the ancestors and spirits’.

A lion sentinel lit up by the last rays of the sun.

We eschewed the horrendously crowded Phnom Bakheng for sunset and returned here, to be rewarded by this glorious vision of the temple bathed in golden light.

While later years saw more temple building, particularly under Jayavarman Vll, none would ever match the scale and hidden architectural coding of Angkor. The advent of Buddhism from Ceylon (Sri Lanka) eroded the cult of the God King and the power of the Brahmin priesthood, whose knowledge of temple architecture and cosmology was soon lost.

In the end no cosmic alignment could save Angkor. Nearly 300 years after the construction of this abode of Vishnu, a series of natural calamities, the failure of the elaborate reservoir system and repeated Siamese invasions subdued this great empire. The capital shifted to Phnom Penh. Angkor (the city) was forsaken.

The Wat itself was spared the fate of the other temples by the protection afforded by its moat that held the encroaching jungle at bay.

83 thoughts on “Angkor Wat, Cambodia: Temple Mountain Of The Khmer”