Much of the Paris we see today is the product of the gargantuan nineteenth century ‘remaking’ of Paris by Baron Hausmann, that ripped out and restructured entire neighbourhoods, with scant attention to more than 2000 years of accrued history. Its ancient labyrinth of narrow, snaking streets and cramped dwellings, transformed into this sumptuous and alluring urban space.

The monumental changes that displaced and dispossessed vast populations, met with stiff opposition of course, but they were swept away by the grand vision of an emperor and his Second Empire!

Traces of the old city can still be found in many places if you care to look. Incorporated into newer structures, just like the city’s inhabitants weave their history into the very fabric of their daily lives.

History is palpable here in Paris. Even when juxtaposed with the modern. Even the most incongruously modern.

A 60 metre long remnant of the Enciente de Philippe Auguste incorporated into the high school Lycee Charlemagne, on rue des Jardins Saint-Paul in the Marais district. The wall that once enclosed approximately 253 hectares on both banks of the Siene, was built by Philippe Auguste II to defend the city from the English, before he left for the crusades in the 12th century.

Foundations of another part of the wall of the same period can be viewed beneath the Musee Louvre. In the centre of the image is the rear facade of the Jesuit Église Saint-Paul-Saint-Louis.

A medieval shop sign depicting a knife sharpener, now part of a modern apartment building on the site (on the corner of rue de Jouy and rue de Fourcy also in the Marais). I suspect he would never have dreamt of a need for the blue sign below!

Reflection of the Henri de Miller sculpture, “L’Écoute” (“Listen”), in the Gothic windows of  Église Saint-Eustache. Here is a close-up….

…and a look at the sculpture itself, an island of serenity amidst the giant construction site that is Le Halles at the moment.

Below is Louis Auguste Lévêque’s 1866 sculpture “Nymphe“, in the Jardin des Tuileries. Quite the contrast, even if just a couple of centuries older than the Roue de Paris in the carnival site beyond. The Roue is a roving Ferris wheel, first erected to usher in the millennium, and is another great way to see Paris from above. (But only when it happens to be visiting).

A picture of striking contrasts is this phantasmagorical fountain and the whimsical wall art in the Place Igor Stavinsky, right beside the 16th century Gothic Église Saint-Merri! 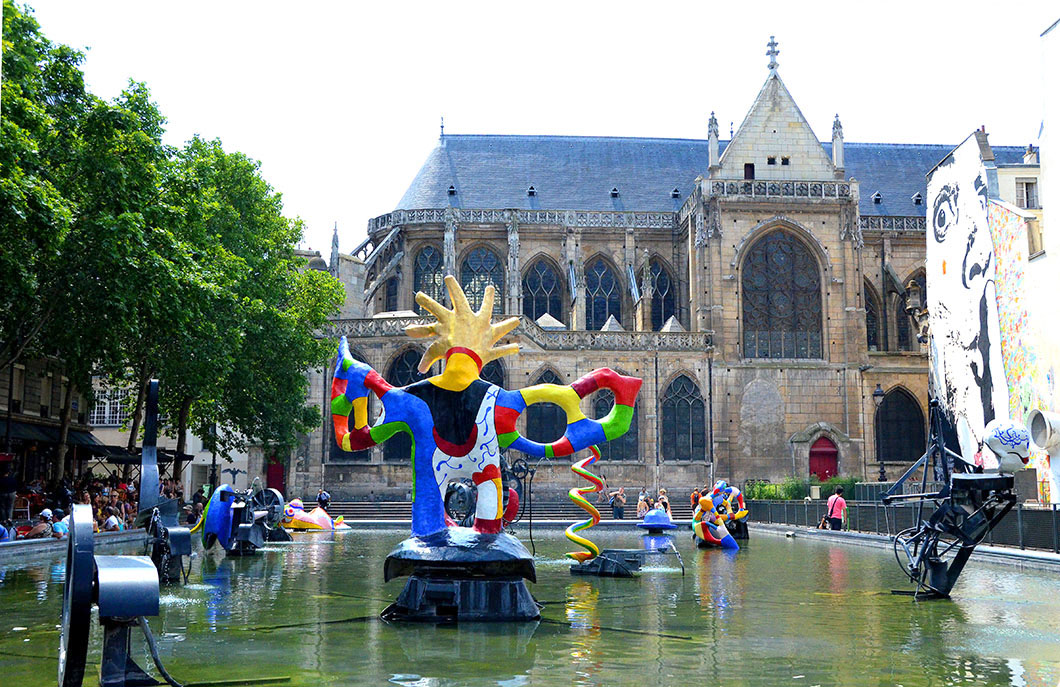 And a final look at monumental Paris from bohemian (and oh so touristy) Montmarte!

Until next time…happy travels, no matter where life takes you.