Tucked deep behind rows of tin roofed tenements a few kilometres from the centre of Thanjavur, sit a group of chatris (funerary temples.) Crumbling. Forgotten. Unknown even to some local guides.

It was the memory of a fleeting online reference that set me off in search of these historic relics during my visit to the temple town two years ago. I had misplaced that link and a random Google search on the way back from Darasuram yielded little more than a snippet from a gazetted government document. It referred to temple inscriptions that mention royal tombs within the Kailasa Mahal cremation grounds.

My guide, Mr. Iyer, had never heard of them and was horrified that I would even consider visiting such a desolate place. “There’s nothing there to see.” he exclaimed, “just a burial ground frequented by drunks.” I told him I’d take my chances.

We drove the length of a narrow road that ran almost all the way along the river Vadavar and stopped near a group of hutments.

A few curious locals we stopped to ask for directions, pointed towards a clearing to our right. There were two brick structures standing over partly exposed laterite foundations. One – that I now know is the funerary temple of Serfoji II – combined an eclectic mix of styles that included Islamic triple domes, chariot wheels (only one of what must have been a pair flanking the steps) and elephant shaped balustrades. The second was more Dravidian in style with a stepped tower sporting rows of sculpted details. Both were in a terrible state of disrepair.

“I know there are more.” I told a sceptical Mr. Iyer. By then we had a dozen or so women trailing us and I decided to seek their help. One of them suggested I speak to Kamala, an older woman who “knows everything about everything” in the area.

They were right about Kamala. “You want to see the Raja Gori? I can show you.” she responded cheerfully in Tamil. Gori, incidentally, is the vernacular term for tomb in many South Indian languages including mine.

Kamala climbed into our vehicle and directed us to a group of hutments where she got out and sauntered off on a narrow path beyond the dilapidated houses, signalling for us to follow. 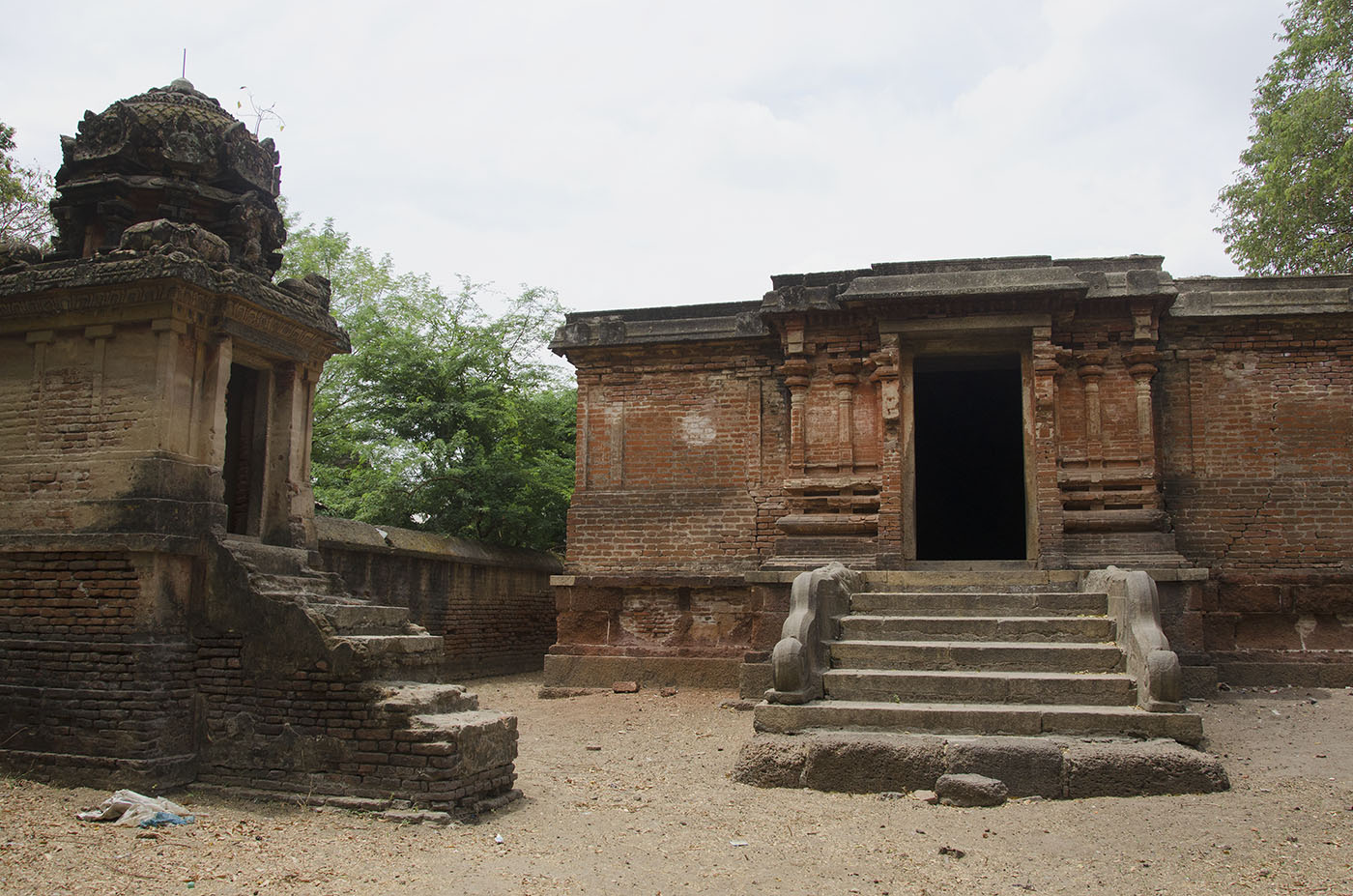 Three brick temples stood within a rectangular enclosure. The largest of the group appeared to be that of the king. It was strangely flat roofed with brick walls stripped of all stucco plaster and detailing except for the pair of yali balustrades.

Two smaller temples facing each other on either side of the gate, were in a similar condition but had their domes intact. A faded plastic water pot sat on a threshold. A dirty rag hung over a lintel. I couldn’t tell for sure, but there might have been squatters occupying some of the temples!

Kamala giggled at my interest. “Oru kaalathle rombo alagha irundhuirku illiayamma?” (Must have been very beautiful at one time, no madam?).

Directly behind the main temple, a mid-sized shrine with a relatively elaborate tower (gopuram) appeared to be that of the chief queen. And arrayed in straight rows beyond a makeshift fence at the back, were at least nine more smaller shrines similar to those near the entrance.

They were most likely memorials to the minor queens of Sivaji Rao II: the last Maratha ruler of Thanjavur. Perhaps built over the spots they were each cremated on.

After the fall of the Chola Kingdom in the 13th century, Thanjavur repeatedly changed hands between the Pandyas of Madurai, the Rayas of Vijayanagara, their offshoot: the Thanjavur Nayaks an finally by the Madurai Nayaks (who had overthrown the Pandyas by then.). There was also an invasion by Malik Kafur, the eunuch slave (and loyal commander) of Allauddin Khilji of the Delhi Sultanate, in between for good measure.

When the deposed (Thanjavur) Nayak Viajayaraghava’s son sought help from the Sultan of Bijapur to reclaim his kingdom from the Madurai Nayaks, the Sultan sent forth an army under the command of his (fuedatory) Maratha general, Venkoji, to assist him.

After defeating the usurping Nayak, Venkoji* (aka Ekoji), decided to strike out on his own and keep Thanjavur for himself. And so began the Maratha chapter of this Tamil heartland. A reign that stretched for nearly two centuries from 1674-1855.

While their influence on local architecture could never measure up to that of the Cholas, the Marathas of Thanjavur – Serfoji II in particular – are credited with being patrons of traditional art, music and dance and helping transform the region into a centre of culture and learning. The collection of the Saraswati Mahal library is one of their valuable legacies. And some say, even sambhar: that quintessential accompaniment to every Tamil meal and snack! 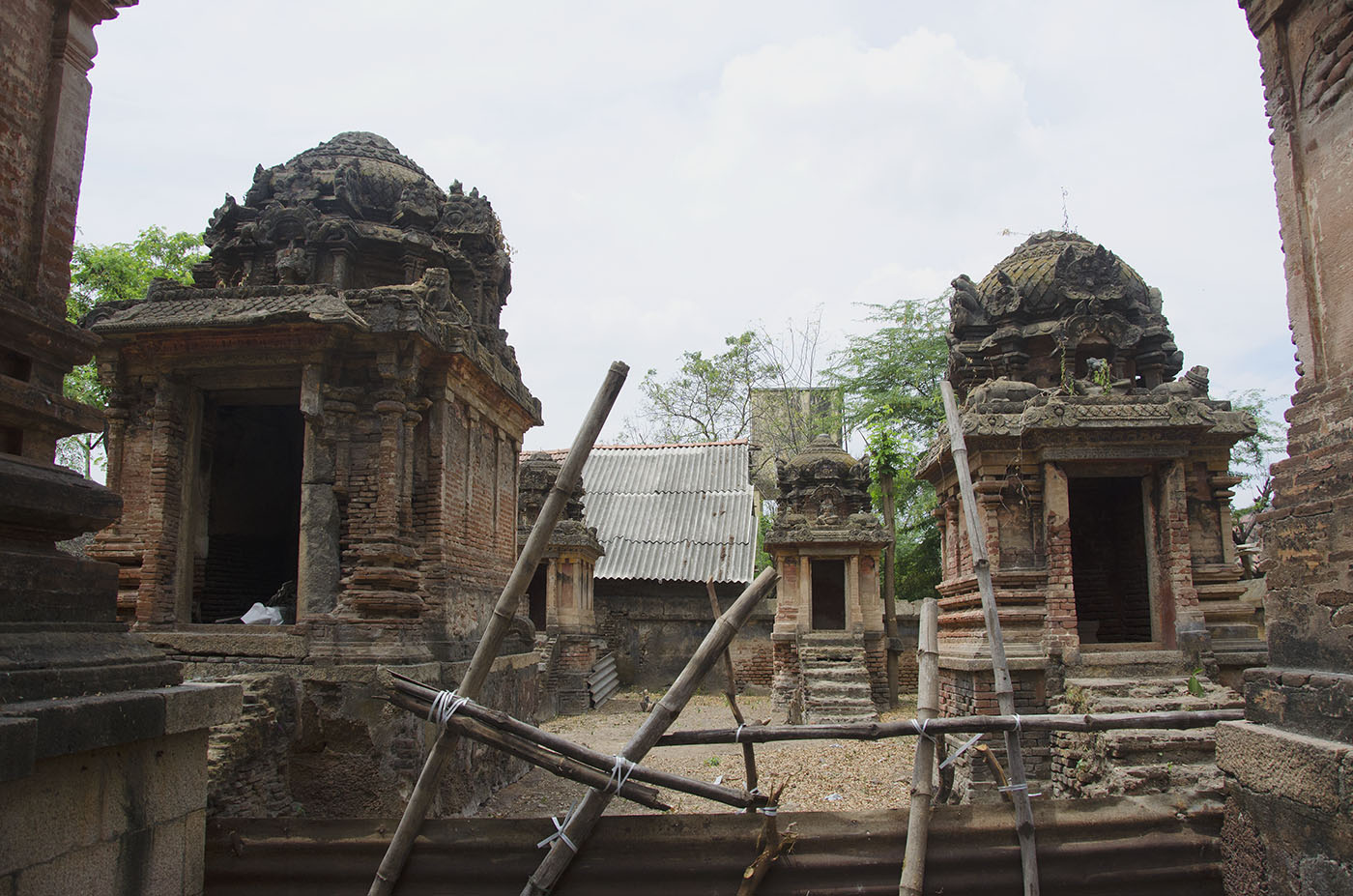 Maratha rule ended in 1855 with the imposition of the doctrine of lapse when Sivaji II died without a male heir. The doctrine was a British annexation policy that mandated that kingdoms without direct male descendants in line to the throne would lapse to the East India Company. Adopted heirs were only allowed titular powers. Members of the erstwhile royal family continued to live in the palace as ceremonial figureheads. The palace and the Kailash Mahal cremation grounds remain under the custody of the current (senior) prince: Babaji Rajah Sahib Bhonsle.

It is remarkable that the 10th century Chola edifices survive intact while these 19th century monuments – possibly the only ones of their kind in Tamilnadu – languish in such a sorry state.

Back at Svatma later that afternoon, a repeat search threw up this ten year old report about the inauguration of a restoration plan by local authorities. This recent article on the Serfoji Memorial website indicates that at least one of the temples did eventually undergo restoration in 2016, even if it does not appear any different in the accompanying photograph.

*Venkoji was the half brother of THE Maratha king Shivaji Bhonsle. A third brother, Sambhaji, was Jagirdar of Bangalore under the Sultan of Bijapur.

Thanjavur is just over six hours by road from Chennai via the Kanyakumari road. Add another hour and a half if driving from Bengaluru.

The closest airport is Tiruchirappalli, commonly referred to as Trichy. (58 km. Approx. 60 min. by road).

Private vehicles or taxis are easily organised by your accommodation once you get there. Request to be taken to the royal cremation grounds

Mid December to mid March is ideal. Tamilnadu receives the highest rainfall during the north west monsoons between mid October and mid December. The roads to the temples can get damaged and the temples themselves can sometimes get inundated. I know of friends who returned without entering Airavatesvara when they found the sunken courtyard filled with ‘dubious brown water.’ Summer months are hot across much of the lower plains of the state.

Svatma Thanjavur was a great place to stay. Read my review here. Or look for more options to suit your budget.

DISCLAIMER: My visit was made possible by Svatma Thanjavur. The Urge To Wander is part of the affiliate programs of some of the resources mentioned on these pages and will earn tiny commissions from qualifying purchases without any extra cost to you. Disclosure policy.

THANJAVUR ON YOUR RADAR? 📌 PIN FOR LATER